Dr S’Avage is shocked when he finds out who the Gloved Hand is after their first murder of the week… He races to tell Ben and calls Cindy with the Gloved Hand in pursuit. Elsewhere, Robbie urges Holly to say she loves him. Trevor is moments from getting Robbie, but Jason pushes him away. Trevor pursues the twins and fires a shot at them in the middle of Pride but with the Gloved Hand nearby will Trevor help to secure their second victim of the week?

Meanwhile, Mercedes is torn over what to do, but decides there’s only one answer… Robbie and Jason run away from Trevor into the car park and jump into Freddie’s car. Trevor steals a car and chases after them. Trevor is still chasing Freddie, Jason and Robbie. They’re relieved when they reach a bridge and Trevor seems to slow down, until they realise the road ahead is blocked. The brothers get out of the car and are faced with a life or death situation to escape Trevor. They jump off the viaduct into the water below, as stunned Trevor watches. He can’t see them in the water and, satisfied they’re dead, makes his way back to the car. Freddie and Robbie re-surface, but Jason is nowhere to be seen. They spot him on the bank but are swept away in the rapids trying to reach him. Jason tries to help but is carried away with the current too. Jason is alarmed when he sees they’re all heading for a storm drain. The brothers get sucked in and are trapped. 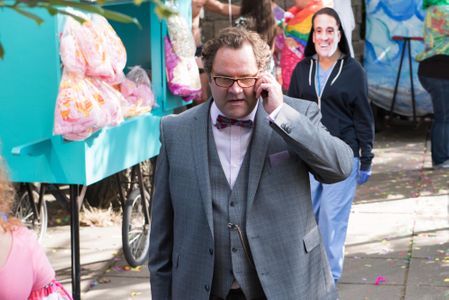 Hollyoaks 20/07 - The Gloved Hand is about to strike