Hollyoaks 20/6 - Sally and Myra argue at the school

John Paul pales when he realises he’s missed father’s day so Scott promises to help him make it up to Sally. Sally and Myra argue at the school and Myra ends up tumbling down the stairs and landing at John Paul’s feet, but did she fall or was she pushed?

Nancy and Darren are still determined to stop Maxine dating Adam in case she tells him about Patrick. They later suggest that Maxine should take a holiday.The Nightingales rally round Alfie as he prepares to hear what the next steps are in his treatment. Fed up of being Marnie’s minions, Diane and Tony try to put their stamp on Nightingale’s. Diane tells Marnie to be more compassionate towards her and Tony, or she’ll reveal all about her and Freddie.​ 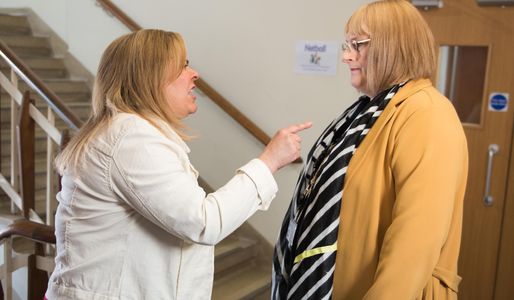 Hollyoaks 07/6 - Cameron and Leela argue over a text message

Hollyoaks 06/10 – Myra gets her hands on some incriminating evidence

Hollyoaks 22/6 - Peri finds out about Tom and Jade