Hollyoaks 21/08 - Maxine, Sienna and Nico panic when they receive a note from Patrick

Maxine, Sienna and Nico panic when they receive a note from Patrick saying “sorry” and then can’t find him. Nico wonders whether he’s tried to kill himself, and Maxine knows where to look for him. She arrives at a secluded spot and rushes to where Patrick is seemingly asleep on a bench. Darren tells Nancy he’s going to propose to Maxine today and she offers to help him. They decorate the Boarding House and Darren practices his speech on Nancy.

Grace tells Trevor that he needs to pick which child he wants – Dylan or Curtis. Elsewhere, the doctor tells Jack and Frankie that Esther isn’t responding to neurological tests. Trevor tells Grace that if Dylan leaves, then he does too but Dylan makes it easy for his dad and lies that he’s going to stay with Nico. ‘GothBoy98’ tells Dylan to get revenge and make Trevor disappear. Meanwhile, Esther has seizure. 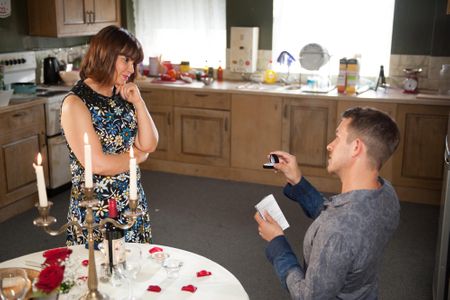 Hollyoaks 29/12 - Maxine, Sienna, Nico and Patrick are getting ready for the vow renewal