Ste and Harry are chucked out of the McQueen’s. Ste overhears Dirk talking to Jason about how empty his flat feels and is hit with a plan. However, in an effort to impress Dirk at The Emporium, he ends up costing him money. At The Bean, Ste and Harry hit the jackpot when Jack reveals he can’t repair the back door until tomorrow. Later, they pretend that they’ve fought off some burglars and Jack rewards them both with a place to stay that night. But when Ste thinks Harry is waiting for him in the shower and climbs in, he’s shocked to discover naked Jack trying to cover his modesty.

Louis accuses Joanne of abducting Lisa when she reveals some information that even ‘Lisa’ didn’t know. DS Thorpe marches over to Louis and Joanne who are in the middle of a heated argument and takes Louis to the station to calm down. Meanwhile, Jason is distracted by Holly and Robbie on one of their first outings together and DS Thorpe is worried that Jason’s personal life is affecting his work. Louis is released and tells Simone of his suspicions about Joanne abducting Lisa.
​
Holly is delighted when Robbie tells her he’s applied to go to the same university as her to study engineering. Dirk interrupts them as they’re about to start ‘celebrating’ and Jason is floored when he sees topless Robbie being thrown out into the village by Dirk. Jason covers to Joe that he’s fine but later makes a suspicious phone call. 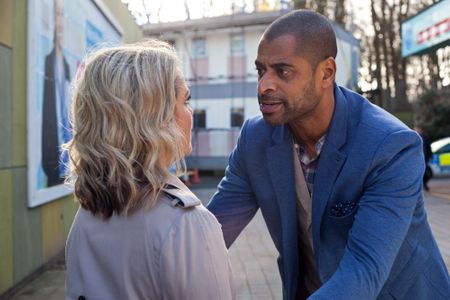 Hollyoaks 14/10 - Harry tries to explain himself to Ste