It’s Cameron and Leela’s wedding day and Cameron has gone missing. Courtney tricks Cameron into meeting her, while Leela finds his confession letter. Leela and Cameron are at the altar, but what does Leela know about Cameron’s crimes?

Sienna receives a threatening Christmas card. Warren swears to find the guy who’s tormenting her and goes to the bar where the photo of Sienna and Joel was taken. Joel is confused when he sees his dad at the bar, will Sienna be found out?

Cindy is preparing for the best Christmas she’s ever had with Alfie until she finds Holly and Nick in a compromising position in the back of Dirk’s van! She forbids them from dating while they’re living under her roof. Cindy, Dirk, Holly and Alfie are moving into the Roscoe’s but are alarmed when they hear someone upstairs.

Scott has slept on John Paul’s bedroom floor and is delighted to be asked to stay for Christmas Dinner. He sees an apology text pop up on John Paul’s phone from James and deletes it. However, James later turns up at the McQueen’s wearing a Christmas jumper.​​​ 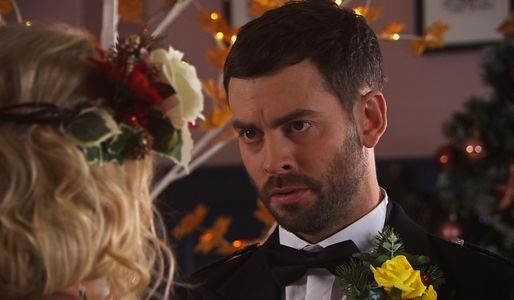 Hollyoaks 18/12 - Cameron is dressed up as Willy Wonka

Hollyoaks 03/12 - Will Cameron and Rick’s desperate act be discovered?

Hollyoaks 12/10 - Cameron Is Asked To Identify A Body