The Gloved Hand makes a desperate decision to cover their tracks.

The Osbornes are furious that Jack has sold their home, but his decision is final. Tony is surprised when his old friend, Finn (James Redmond) arrives. Tony and Diane renew their vows. Later, Jack tells his family that he’s put an offer in on the Boarding House, which would mean they’re debt free. Tony walks around the pub, greeting his guests and loving his life in Hollyoaks. Cindy is shocked when her secret husband, Mac and his kids, Ellie and Nathan turn up to reveal they’re the new owners of The Dog.

Grace is panicked when Trevor grabs her at the hospital and drags her into Dr S’Avage’s office. He tells her that despite everything, he still loves her. Ben sees Grace in the corridor and she lies that Trevor isn’t coming back. She gets in the car but Trevor is waiting for her, ready to start a new life. They’re on their way to Paris when the police pull them over. DS Thorpe asks Trevor to open the boot and Trevor is arrested. 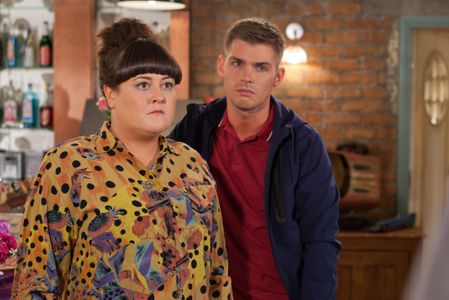 Hollyoaks 21/11 – Someone is desperate to cover his tracks

Hollyoaks 20/07 - The Gloved Hand is about to strike

Hollyoaks 18/11 – Sienna and Patrick cover their tracks, but who will suffer the consequences?