Robbie is hell-bent on getting revenge on John Paul after suspecting John Paul wanted to leave Finn to die, and locks him in a store cupboard when a fire alarm goes off. Jason frees him, but John Paul knows it was Robbie. When pushed to the extreme, how will John Paul react?

Darren tries to help Leela when he sees her in the village after their disastrous ‘date’. When Nancy finds Leela sleeping at Darren’s, will she get the wrong end of the stick?

Sinead is left heartbroken as her family turn their backs on her when Lindsey suggests she’s lying about Katy’s illness, but back at home Sinead shows them a nappy with blood in it and Dianne and Freddie called an ambulance, terrified.

And has Dennis finally found love after Leanne? 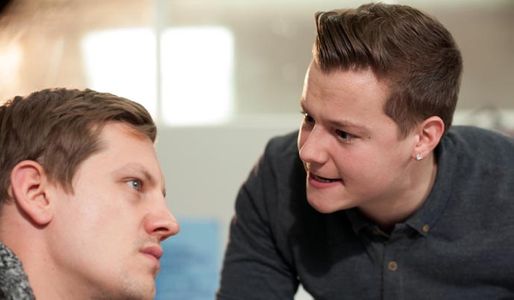 Hollyoaks 24/06 – Will Jason and Robbie have a good birthday?