Hollyoaks 24/12 - Lockie hears about the explosion

Lockie hears about the explosion and is concerned that Cameron had something to do with it. He tells Cameron to leave in the next two hours or he’s going to the police.

Harry can’t believe it when he gets accepted onto the football scholarship in California, but can he leave Ste?

The police burst into the McQueen’s looking for Reenie. She has been hiding in the wardrobe with Porsche, and Myra decides to lock them in the bedroom until they can get along. As their arguing continues, Myra asks John Paul whether he’s sure he wants to get back with Ste and he says he does. In the bedroom, Reenie and Porsche soften towards each other. Reenie is resigned to the fact that she’ll be going back to prison, so Porsche suggests they go away together. Elsewhere, John Paul and Ste meet under the archway. John Paul gets down on one knee but is distracted by Ste looking at a shocked Harry.

Meanwhile, Reenie and Porsche are packing. Porsche explains to Lockie that if he wants to be with her, he’ll have to take Reenie too and tells him to meet her in The Dog car park later. Porsche, Reenie and the rest of the family assemble in the car park and the taxi arrives. Cleo tells her mum that she’s not strong enough without her, will Reenie leave her behind?

Lisa is filled with guilt when Simone and Louis present her with every Christmas present they’ve bought since she went missing, while Zack is elated when he’s presented with some car keys. He heads straight over to the McQueen’s to see Theresa but she breaks up with him. Zack is angry and gets in his car, he looks at his phone as it start to ring, hoping it’s Theresa but ends up crashing in to the City Wall. Lisa goes with ‘her brother’ to the Roscoe’s garage. Zack wishes that he could meet a girl like Lisa, so she kisses him and tells Zack she’s not the real Lisa… 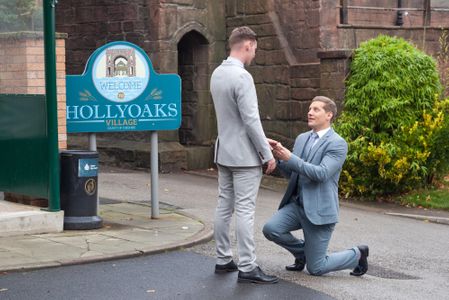 Hollyoaks 04/12 - Has Nancy made the biggest mistake of her life?

Hollyoaks 24/08 - Darren Is Wracked With Guilt