Sienna is convinced Darren is about to propose so when she walks in and sees him with the ring she accepts before he has a chance to explain.

As Esther hangs the banner that reads: Will you marry me again Frankie, she realises what a fool she's made of herself.

Frankie is thrilled but Tom is too angry with her to be happy for her.

Lindsay is suspicious of who Cindy's attacker may have been, remembering what happened to her with Dr Browning.

Will she have the courage to speak up?

Meanwhile Dodger can't believe it - Dennis has thrown away the old mattress, not realising it contained £100,000!

The boys make sure to get it back but while they spend the afternoon doing that, Leanne is devastated as her fiancé misses her graduation. 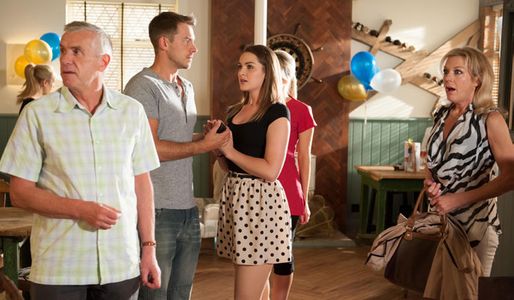 Hollyoaks 28/08 - Are things unravelling for Sienna?

Hollyoaks 14/08 - The Blackmailer Posts A Letter Addressed To Sienna

Hollyoaks 14/08 - Sienna plays out her sickest plan yet

Hollyoaks 26/01 - There's a new development in the murder case