Joanne turns up at Louis’ door and he reluctantly tells her he will meet her at The Folly. He covers to his family that the letters have been coming from an old school friend as a joke. Joanne tells Louis her husband has left her with huge debts and she needs five grand. Elsewhere, Theresa feels guilty that she’s hiding Lisa’s secret from Zack and urges Lisa to come clean. Meanwhile, Louis gives Joanne £200 but it’s not enough and Joanne threatens to tell Simone about their affair. Later, Simone gets a mystery phone call. Lisa also prepares to tell her family the truth.

Alfie is in a hospital bed having tests – he’s adamant his cancer is back. Neeta finds out that Alfie wants her to adopt him.

Tegan returns and Ziggy is jealous when she talks about a lad she met in Tenerife . Ziggy spies on Tegan when she goes to meet Seth. Ziggy chases Seth away and when he realises he’s upset Tegan, follows her into the hospital lift. He tells her he wants them to be together and as they’re about to kiss the lift doors ping open to reveal Leela, has she seen their intimate moment?

Esther misreads the signs when Grace calls her help after she hurts her back. 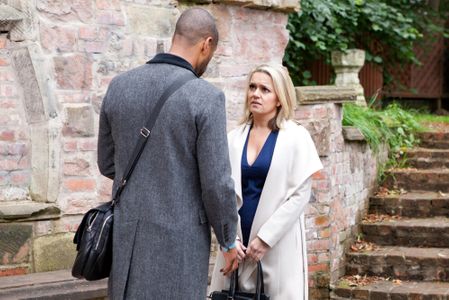 Hollyoaks 30/11 - Louis is stressed about Joanne

Hollyoaks 27/11 - Diane is faced with a life-changing decision