Maxine is alarmed to find Patrick’s will is on fire. Sienna and Nico also arrive at the scene, but who is responsible? It’s the day of Patrick’s memorial and Maxine needs Darren by her side. Nancy is still suspicious about Darren’s cagey behaviour, while Sienna decides to get answers about why Patrick left everything to Maxine… People start to gather for Patrick’s memorial and Maxine panics when she sees Ben drilling into the wall to secure a plaque. Sienna arrives and launches an attack on Maxine, accusing her of manipulating her father. Later Maxine is confused when she hears Patrick’s voice over the baby monitor…

​Joanne calls Simone to tell her about an opening at her firm and Louis’ heart sinks. Lisa sets a romantic scene for a movie night with Zack.

Tom gives Alfie advice on how to let Jade know how he feels. Alfie confides in Tom that he wants to be Jade’s boyfriend.
James returns but Cindy tells him she doesn’t need his help anymore. However, she needs Holly’s help to try and get Dirk back. She waits for Holly in The Hutch, but James is there too and Holly is furious when she turns up and sees them together, thinking her mum has moved on from Dirk. Holly tells her mum about her police caution for possessing cannabis, so Cindy calls James for help. 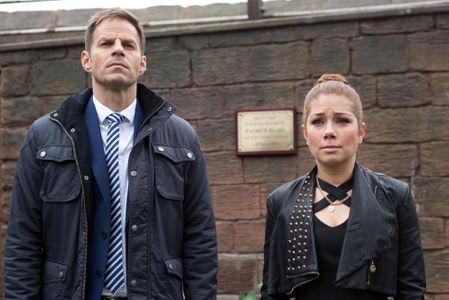 Hollyoaks 28/05 – Will Maxine stick by Patrick?

Hollyoaks 28/02 – Maxine must face the consequences of her actions