Hollyoaks 28/3 - Rachel is packing her bags

Rachel is packing her bags and begs Nathan to listen to her side of the story. He can’t forgive her and tells herto go travelling alone. At the hospital, Tegan and Celine ogle patient, Liam who is snogging another woman in reception and has been admitted after burning his bum on a pair of hair straighteners. They both rush to treat him. Cleo turns up and tells Celine she’s got a date for Pete’s trial. Celine chooses a night with her sister over Liam.

Robbie tells his brothers that he’s leaving for good, while Jason and Holly set things straight. Cleo can see Holly’s upset and suggests a night out at The Loft with her, Celine and Tegan. Meanwhile, the brothers are surprised when Jason announces that he’s leaving too. They play one last game of football before Robbie and Jason leave in a taxi.

Elsewhere, Celine,Tegan, Holly and Cleo are at The Loft when Liam arrives. Holly gets a call from Jason telling her that he and Robbie are leaving and she needs to get to the airport if she wants to stop Robbie. Unaware that Holly has been drinking, Cleo encourages her to drive to the airport. Both girls jump into Holly’s car and race off to find Robbie. With Tegan being sick outside and Holly and Cleo now gone, Celine makes her own fun with Liam.

Jason and Robbie hear thelast call for their flight and head to the departure gate, just as Holly arrives, will she stop them? Driving home from the airport, Holly loses control of the car but whose lives is she putting in danger? 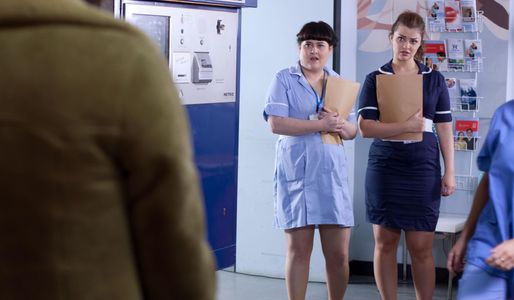 Hollyoaks 28/03 –Sinead wants to prove herself

Hollyoaks 28/6 - Reenie takes to the stand