Diane maintains that Tony is guilty of kidnapping Rose but he’s released without charge. Tony recalls that Diane borrowed his car; he goes through her call list and rings an unknown number that he finds. A male voice answers with a crying baby in the background, does this link Diane to the kidnapper? DS Thorpe asks Tony, Tegan and Diane to do a press conference, during which the reporters hound Tony until he drops Diane in the firing line.

Cindy asks Jason to help with her next chapter but when he declines, she spitefully tells him that Holly likes Zack. Holly innocently hugs Zack in support and Jason sees. Later, Cindy asks for Jason’s help a second time - he declines again but we see him struggling to fight his attraction. Meanwhile, Louis tells Zack they’ve decided to leave Hollyoaks.

Sienna opens up to Ben. When she falls asleep, Ben asks Jason for files on Patrick. 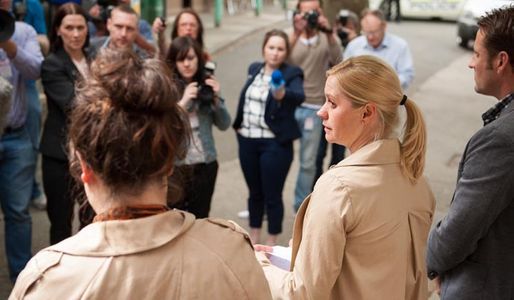 Hollyoaks 16/02 - Tony Wants To Know What Diane Is Hiding