Hollyoaks 29/06 - Prince Gets Caught Trying To Steal From Simone

Goldie is delighted to see Prince again but Hunter is worried about what his brother has got planned to get Goldie's savings back. Prince is being tutored by Louis at The Loveday’s but whilst there, he steals their spare keys. Later, Prince returns to their flat to steal Simone’s jewellery but she comes home and catches the masked intruder. He flees but pushes Simone and she tumbles to the floor with a yelp of pain.

Farrah is concerned by how attached Kim is getting and assigns her to a new psychologist. Mercedes seems spooked by the arrival of a letter. She’s on edge and later calls Ryan a cheat in front of Leah and Lucas. 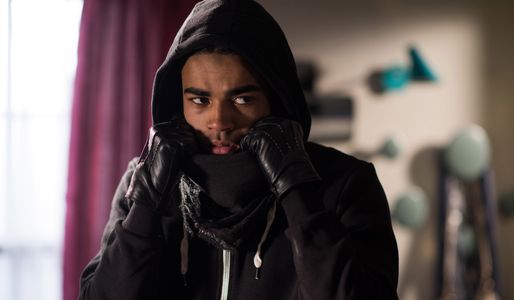 Hollyoaks 28/06 - Simone Reveals Her Mum Is Dying Of Cancer

Hollyoaks 12/09 - Lily Gets Drunk With Prince

Hollyoaks 02/06 - Goldie Gets Her Job Back At The Salon

Hollyoaks 21/4 - Kim gets another text from Lindsey