Maxine is still spooked about hearing Patrick’s voice. Ben informs her that Sienna has started legal proceedings to contest the will. Ben, Sienna and Nico are concerned when Maxine screams from the bathroom, but what has she seen? Later, she gets a call from ‘Patrick’. Maxine goes to see Darren who comforts her. However, back in the flat, Maxine continues to be tormented by strange occurrences. Later, Maxine is horrified by another reminder of Patrick, which is a little too real.

Louis is trying to convince Simone not to take Joanne’s offer. Joanne tries to kiss Louis, but he pushes her back and she’s surprised by his reaction. Louis arrives home to find tearful Joanne and a grave looking Simone sat together, has Joanne revealed their affair?

Darren is still leaving Nancy out in the cold so Cindy gives her advice on how to get his attention. Cindy meets up with James again with the ulterior motive to get help for Holly. James doesn’t seem as keen as before but Cindy isn’t taking “no” for an answer. Meanwhile, Nancy gets some sexy underwear and heads to the garage, but is suspicious when she sees Darren hugging Maxine. James finds out that Cindy is using him but still offers to help with Holly, as long as she resumes her case against Mac, but why is he so keen to hurt him? Nancy confronts Darren. 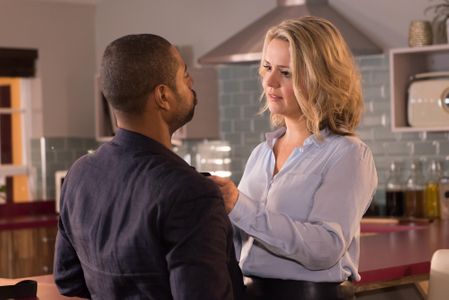