Hollyoaks 3/3 - Grace is reluctant to be sympathetic to Trevor

Grace is reluctant to be sympathetic to Trevor, while Nico is in hospital and Sienna and Ben’s relationship is strained. Trevor is struggling through a shift at The Loft and tells everyone to leave when he reaches breaking point, just as Grace turns up. She tells him that she wants the ‘real man’ back that she fell in love with. Ben asks Myra if she’d get tested to be a kidney donor for Nico, knowing Theresa was a match last time. Sienna is increasingly frustrated that Ben is closer to her daughter than she is. Myra gets tested. Theresa tells Nico that she wishes she could give her another kidney and Nico ‘jokes’ that she’d have to die first, is Theresa her next victim? Sienna visits Trevor at The Loft.

Joanne arrives at Price Slice but ends up with a jar of white pasta sauce poured over her, what has Simone discovered? She snaps and tells Simone that Louis ran her over. Later, Joanne is in the police interview room with Wayne who tells her the truth about ‘Lisa’. 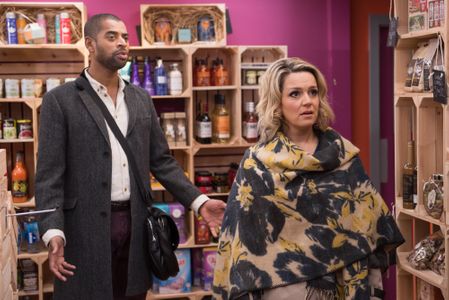