by Emmy Griffiths Published on 1 March 2016

Cameron struggles to cheer Peri up when she fails her piano exam. He’s annoyed that Ste always seems to know the right thing to say. Ste and Leela plan a cheer-up party for Peri, which frustrates Cameron even more, until Ste tells Peri that it was her dad’s idea. Tom is the only one that can make it to the party. Leela and Ste encourage Cameron to go to The Loft with him, so the teens can be alone but Cameron doesn’t realise he’s leaving Peri and Tom on their own.

There’s tension between Trevor and Grace after he stayed out all night. Elsewhere, Sienna has dolled herself up for the day on the off chance she’ll bump into Trevor. Nico spikes a bottle of wine and plans to give it to Theresa… She’s annoyed when she has to have dialysis instead of being able to go to Peri’s party. Theresa surprises Nico with her own two-person party at the hospital and Nico has a change of heart about killing her. However, back at the flat, Theresa drinks the wine and Nico panics when she collapses. Grace wants to help Trevor after researching PTSD but he keeps shutting her out. He goes to meet Sienna, while Grace is struggling to cope on her own at The Loft.

Fed up of walking into awkward situations with Diego and Myra, John Paul sets them a challenge to go twenty-four hours without having sex to see whether there’s more to their relationship. Diego accepts his challenge, but Myra is worried. 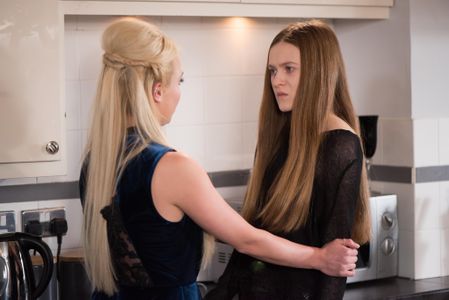