Hollyoaks 8/2 - ​Lindsey races to the scene of the crime

Lindsey realises that she dropped an earring at the scene of her latest attack but as she races to the scene of the crime, DS Thorpe is handed the earring in an evidence bag… Kim is increasingly furious with Lindsey and pushes her when they get into an argument. Joe rushes over, worried about the ‘baby’ and Lindsey takes advantage, faking stomach pain. Kim knowingly pushes for Lindsey to be checked out at the hospital. Lindsey says no but when someone offers up their home heartbeat kit, Lindsey is forced to give in, will she be found out?

Elsewhere, DS Thorpe is interrogating Freddie. However, when he refuses to reveal anymore, DS Thorpe lets him go to fend for himself. Lindsey’s world crumbles when Freddie calls… Meanwhile, Tegan is spooked by a visitor at the hospital.

Jason tries to persuade Holly not to go to Edinburgh Lothian University. Dirk fears that Jason is holding her back so plans a Scottish surprise at The Dog to convince Holly to follow her dream. However, jealous Jason storms in and accuses Holly of cheating on him when he sees her chatting to Nathan.

Trevor continues to suffer with post-traumatic stress after Ben’s attack on him. 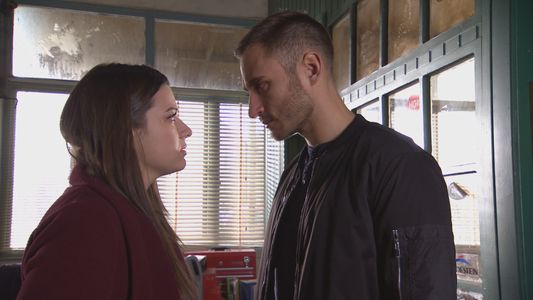 Hollyoaks 08/10 – Lindsey is deeply suspicious of a new arrival

Hollyoaks 3/2 - Darren and Nancy are concerned about Charlie