Reenie and Sienna battle it out for a job at Price Slice. Nico spikes Sienna’s soup with painkillers but Sienna mixes up the bowls. Sienna gives Nico a bracelet and Nico feels guilty about trying to poison her mother and tries to take back the soup – but which soup has the pills in? Sienna goes back to work and Nico realises that she ate the poisoned soup, not Sienna. Nico texts Dylan for help and collapses. Dylan calls an ambulance. The doctors tell Sienna that Nico took an overdose.

Jason helps Cindy with her novel. Holly enters and they spring apart like they’ve done something wrong. Cindy whispers ‘same time tomorrow?’ to Jason and he is worried what he’s got himself in to. 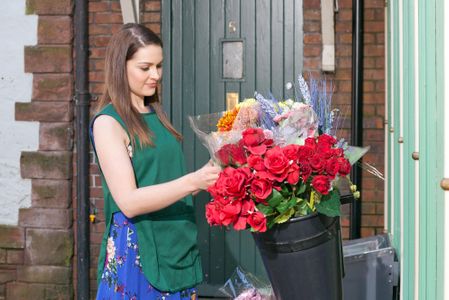 Hollyoaks 28/6 - Reenie takes to the stand

Hollyoaks 09/9 - Sienna Flees A Fundraiser When The Police Arrive

Hollyoaks 02/06 - Goldie Gets Her Job Back At The Salon

Hollyoaks 2/06 - Grace is in hospital