by Ursula Dewey Published on 3 October 2013 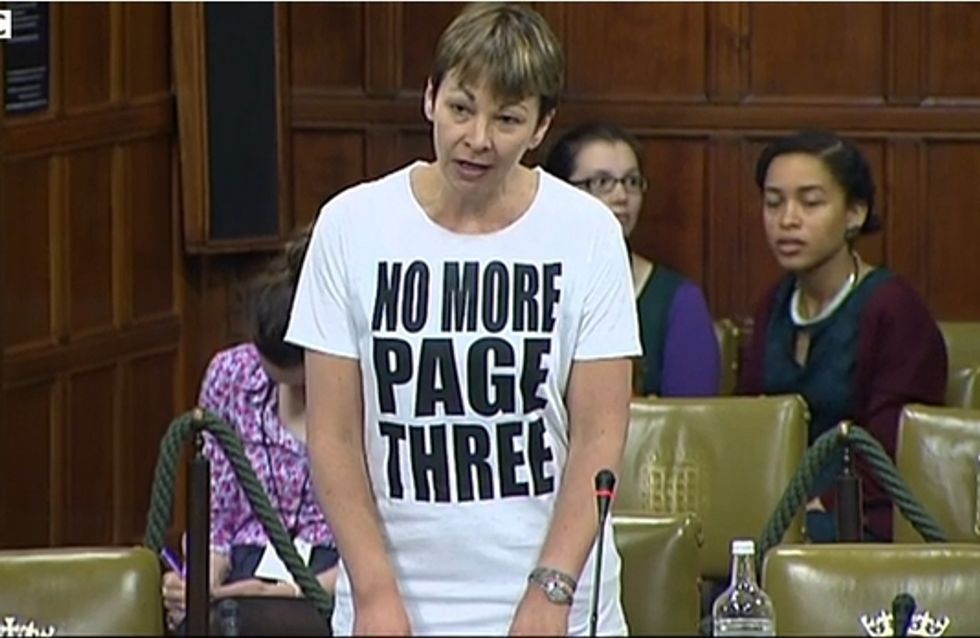 Fed up of seeing boobs in newspapers? Us too. Which is why we've been fully supporting the No More Page 3 campaign. Since it launched last summer they've had over 119,000 signatures (including ours) to petition to put an end to this archaic and sexist practice in The Sun. But how close are they to achieving this goal?

Page 3 has the delightful tradition of providing wank fodder to men across the nation, giving them a morning perk as they head to work, and simultaneously dehumanising women, reducing them to a pair of plus size tits and a smoulder. It's the perfect example of in-your-face sexism that's still widely regarded as just a bit of fun.

Actually, it's just a bit f*****d up. And ample proof of gender inequality. In effect the fully clothed man reading The Sun is no better than Robin Thicke and his gang of naked Blurred Lines groupies. How is it ok to oppress women this way in 2013? And why do the powers that be insist on keeping us down?

It's a complicated message that is being sent out to men and women. And a confused one. Especially when The Sun also report on the bravery of girls like Malala Yousafzai who risked her life to promote the educational rights of girls in Pakistan. How can a story like that sit alongside Page 3? Anyone else had enough?

If you're tired of despairing about this issue then it really is time to get involved and join the enlightened. The No More Page 3 campaign has had plenty of support - including that of over 28,000 head teachers, 300,000 teachers and 500,000 Girl Guides. And contrary to sexual stereotypes, women aren't the only ones offended by Page 3 - in fact it's insulting and belittling to men to think they need a daily dose of boobs to get through the news of the day.

​Recently the campaign has been hotting up with Labour leader Ed Miliband voicing his opinion on the topic saying the modern world has no place for pictures of topless women in newspapers.

Asked by BBC Radio 5 whether he would ban Page 3, Ed Miliband said: "I'm not in favour of banning it. I do think though that Page 3 is a total anachronism in this day and age. We have got a free press in this country and I think a ban on that is not right, but I will say to you very squarely, this is an issue I take very seriously.

​"When I think about my two young sons - who admittedly are two and four at the moment - I don't want them growing up in a country where the perception of women and young girls that they're given is simply as sex objects."​

The campaign has also been in the spotlight thanks to The Mirror who created an ad campaign mocking The Sun's use of topless models and rebranding itself as the intelligent tabloid. To do this it had an image of a woman in a bathtub with her elbows sticking out (who'd have thought they could look like boobs) with the strapline "Made you think" - TFL banned the posters. Could this be a sign that the tide is turning?

We're hoping so. This summer also saw the debate reopen about lads mags with a campaign led by UK Feminista and Object - with some encouraging success. It seems we're all ready to have this debate once and for all.

The Co-op confirmed it would no longer be retailing most 'lads mags' but what does that mean for sexist newspapers like The Sun? Sadly there's a lot of commercial resistance. As the UK's most popular paper it's no surprise retailers don't want to drop it from their offering, but we're optimistic that with enough support The Sun can change it's Page 3 to be more newsworthy and less boobs worthy.

We think Doc Brown says it pretty well - check out his No More Page 3 rap below:

Like us on Facebook!
You might also like
Donna Summer | 31 December 1948 – 17 May 2012
by the editorial team
Breast Cancer Vs. Page 3: Another Very Good Reason To Back The Campaign
by Ursula Dewey
No nipples please - we're Irish: The Irish Sun bins boobs on Page 3 (sort of)!
by Maria Bell
Page 3 Is No More! 5 Other Issues We Still Need To Change
by Emmy Griffiths
MP Caroline Lucas told to cover up during debate on the No More Page Three Campaign
by Ursula Dewey
Lose the Lad's Mags campaign
by Maria Bell
Calvin Klein Under Fire For 'Sexist' Advertising Campaign
by Pascale Day
The Naked Truth: Photographer Shows What Real Boobs Look Like Without Photoshop
by Maria Bell
Is Change.org the way for women to be heard
by Maria Bell
Malala Yousafzai: End the Education Emergency
by Maria Bell