by the editorial team Published on 2 September 2013 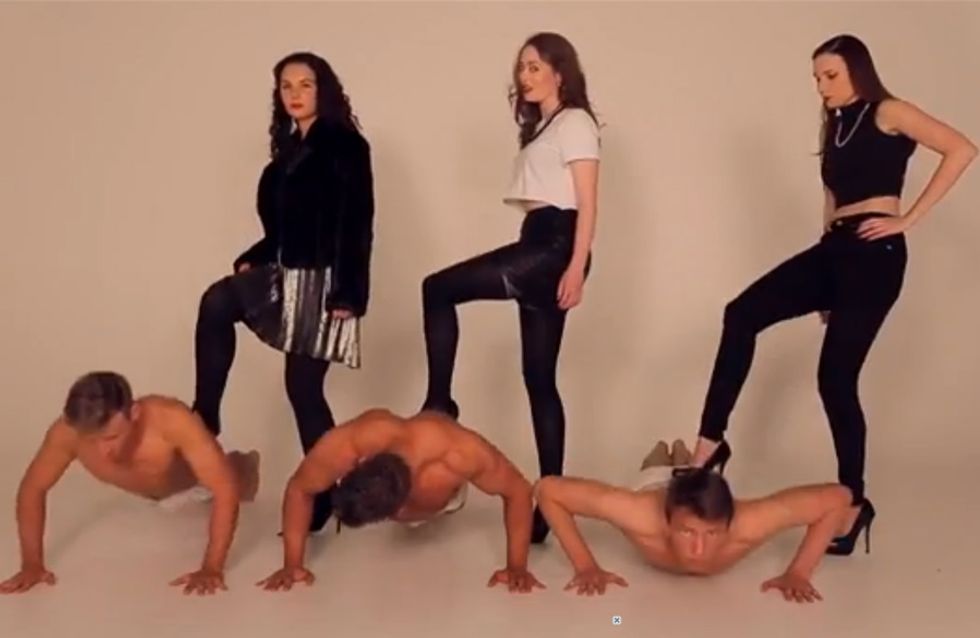 We're not gonna lie. We find Robin Thicke's Blurred Lines video to be a piece of complete sexist crap - the naked version and the mainstream version. But we're failing to understand how a parody of the video, Defined Lines, where men instead of women are in a state of undress, was taken off YouTube for indecency. Especially when the Blurred Lines video is still online and racking up millions of hits.

The lyrics to Robin Thicke’s number 1 hit Blurred Lines caused uproar, but that was nothing compared to the outrage when the video was released. The summer’s most controversial song featured Robin Thicke, Pharrell and T.I. cavorting with a bunch of models in nude bikinis. There’s even an explicit X-rated version where the girls have lost the tops altogether (the men obviously still keep all of their clothes on).

​Understandably a whole lot of women were ticked off at the sight of these three fully-clothed men leering at the naked women, whilst creepily repeating: “You know you want it”.

​​​In response to the objectification, exploitation and unashamed male chauvinism of the video (which so far has notched up 160,000,000 views on YouTube) a group of furious women decided to take matters into their own hands.

Three Auckland law students made a shot-for-shot parody reversing the genders, replacing Thicke's topless female models with nearly naked men and changing the lyrics to voice their frustration at the sexualisation and subjection of women in the original.

The tongue-in-cheek satire – entitled Defined Lines – immediately went viral, but the irony of the message was clearly lost on some, as it was removed by YouTube after being reported for indecency and featuring inappropriate content! Someone please explain how that's fair?

Despite the fact there’s no nudity (the men are wearing white boxer shorts) and the lyrics intelligently examine the sexual dynamics between men and women, it was deemed too raunchy to be posted on the video-hosting platform.

Anyone else feel like there’s a massive double standard whacking them in the face?

So let’s recap: the original with almost-naked models acting as Robin and co.’s playthings is a YouTube sensation, but a comedic version with men in their pants is taken off the Internet for being inappropriate…

In the words of Adelaide Dunn, Olivia Lubbock and Zoe Ellwood, the eloquent stars of Defined Lines: "We're feeling the frustration, from all the exploitation…what you see on TV, doesn't speak equality, it's straight up misogyny."

Following widespread indignation and cries of rampant sexism from a number of people – including outspoken feminist author Caitlin Moran – the female empowerment Defined Lines video has since been posted back on YouTube.

Watch Defined Lines below and tweet us @SofeminineUK to let us know if you think the video is inappropriate or proving a very valid point.

​You can probably guess where we stand...

Loading...
For all the best videos, memes and shareable news!