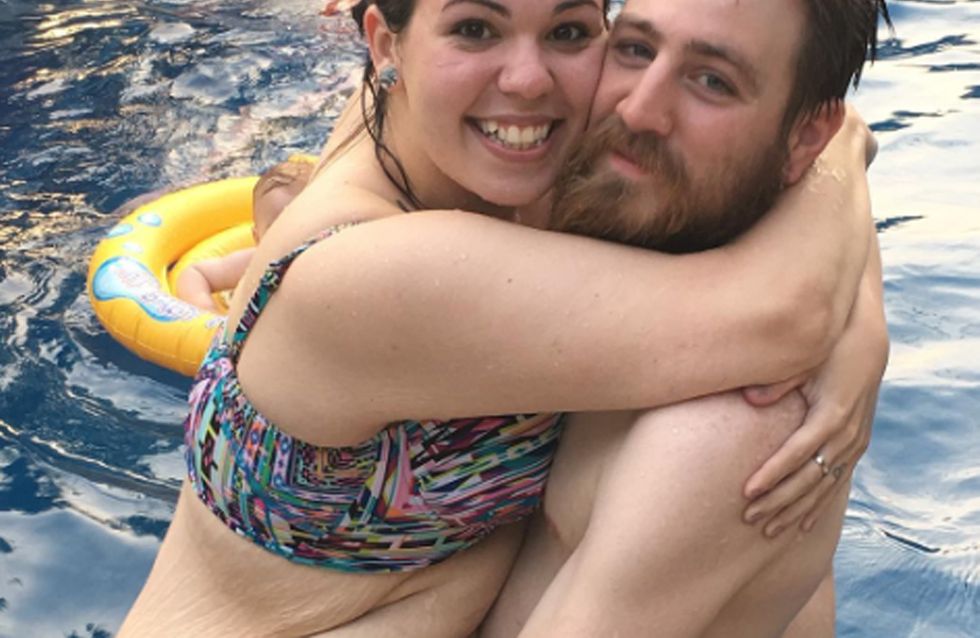 Texas-born Jordaan Spark is an inspiration to us all. The mother has lost a whopping 130 pounds which has not only improved her overall health but she's happier than ever as evidenced in her Instagram feed. And while no one can argue that nine-stone weight loss is a massive achievement, Jordaan isn't 100 per cent content with her body image (are any of us ever really?) as the unwanted pounds have left her with loose, excess skin.

Jordaan Spark has started a very important conversation about the perils of extreme weight loss. The Texas native took to Instagram recently to celebrate just how far she'd come after losing an impressive nine stone with a cute photo of her husband lifting her up in a swimming pool. The couple's happiness is evident in the image which Jordaan touched on in the caption but she was also keen to point out the excess skin her weight-loss mission has left her with.

annnnd POOF my kangaroo pouch is hidden. I finally fit into these jeans and they hide my excess skin so perfect! ❤️

She wrote: "The excess skin is real, but that's what you get when you've lost 130lbs. Anyways, this post isn't about my skin, it's about the fact that my husband can pick me up! Hot damn. ❤️" The post has since gone viral on the photo-sharing app with Kourtney Kardashian among the 45.7K likers. Jordaan's also been inundated with kind comments - many of which congratulate her on her achievement.

The excess skin is real, but that's what you get when you've lost 130lbs. Anyways, this post isn't about my skin, it's about the fact that my husband can pick me up! Hot damn. ❤️ EDIT; the kid in the back is NOT drowning, he was mid coming up. He is alive and well. ???

One gushed: "I'm in tears right now! So amazing and I'm thrilled for you. Xoxoxo," with another adding: "That's awesome! Good for you!! Keep being an amazing inspiration to others."

Guess what?! If you lose over 130lbs more than likely you're going to have loose skin. AND that is OK! I would much rather carry around a a couple extra pounds of skin vs. hundreds of pounds of fat! For every rude person who wants to say something, you can donate money for my excess skin removal surgery so that I can be what you think is beautiful. ??? anyways, here is some #motivationmonday for y'all. ❤️ thanks for all the love. ✌?

Jordaan isn't shy about sharing photos of her half-naked before-and-after bodies and keeps herself motivated to push on by posting progress selfies as a reminder of how far she's come. She started her weight-loss journey in January 2015 when she tipped the scales at 310 pounds (almost 50 stone), committing herself to a healthy diet and daily workouts. She now weighs 174 pounds (just over 12 stone) and hopes to shed a few more pounds before having the excess skin removed for which she's set up a GoFundMe page.

Do you have a similarly inspiring weight-loss story? Share them with us @soFeminineUK