by Pascale Day Published on 2 December 2015 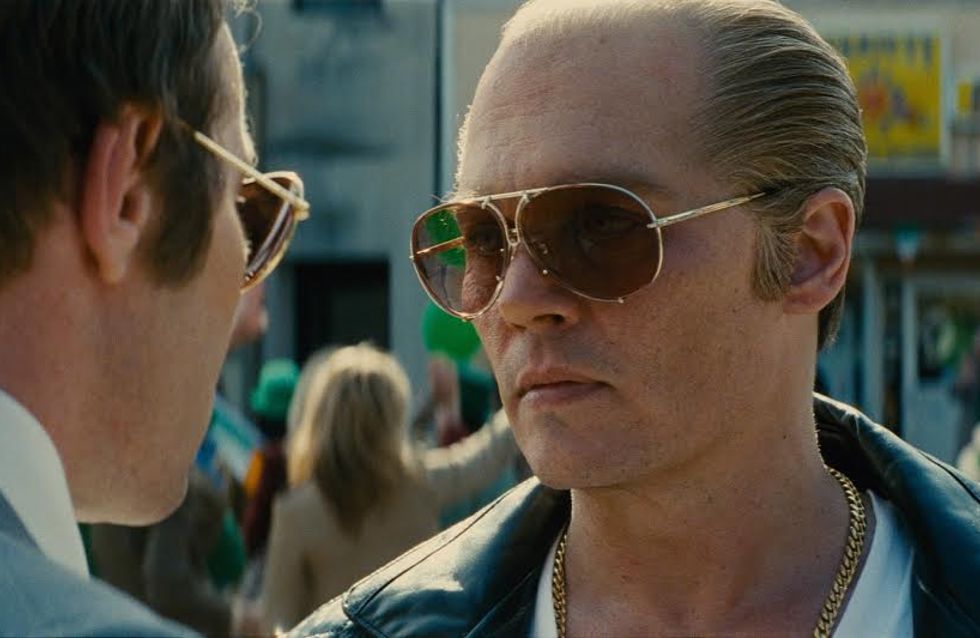 As James 'Whitey' Bulger in new crime biopic Black Mass, Johnny Depp gives one of the best performances of his career. Balding and blue-eyed, gone is the dark and brooding babe we once knew (and have been totally obsessed with for the last 10years). But while Depp might be one of the greatest, he is not alone in his metamorphosis abilities. We take a look at some of the great transformational performances by some of our favourite actors to grace our screens.

Johnny Depp's performance as organised crime boss James 'Whitey' Bulger sees him undergo a dramatic transformation that involves a bald cap, stained teeth and electrifying blue contacts. On top of his new looks, Depp also adopts a Boston drawl and an aura so menacing that the terror the characters feel around him is palpable. From a scared sap Sleepy Hollow to drunken pirate in Pirates Of The Caribbean, Depp is known as a versatile actor, but this film shows Depp at his chameleon best.

It's impossible to talk about actor transformations with mentioning Charlize Theron's phenomenal turn as infamous female serial killer Aileen Wuornos. Theron really committed herself to the role to get the right look: she put on weight, wore dentures, shaved her eyebrows, and repeatedly had her hair thinned. And the results couldn't be further from the beautiful Charlize Theron we know and love today - she swapped her Dior sashay for a more clumpy, more butch walk. Her uncanny resemblance to the actual Aileen Wuornos earned her a well-deserved Academy Award.

Everyone was surprised when music's favourite pop diva underwent such a huge make-under to play the role of Ms Weiss, social worker to Gabourey Sidibe's character, Precious. Appearing in dowdy clothes and not a stitch of makeup on her face, Carey's new look came with a new personality too. Gone was the sweet talking, high-note-hitting, sweet-as-candy songstress, and her was Ms Weiss, with her croaky, deep New York drawl. Mariah said of the transformation: "I had to lose all vanity. I had to change my demeanor, my inside, layers of who I am, to become that woman."

There's no doubt about it: Christian Bale is the king of chameleon looks. For his role as insomnia-plagued Trevor Reznik in 2004's The Machinist, Bale lost more than 28 kilos, leaving him at around 54kg - for anyone who had previously seen him as the super-fit Patrick Bateman in American Psycho a couple of years before, this was a huge shock. His former assistant wrote in a biography of Bale that his diet consisted of "water, an apple and one coffee". As soon as filming finished on The Machinist, Bale had 6 months to gain the mass he needed to play Batman in Batman Begins.

For her role as unlucky-in-love Bridget Jones, Renee Zellweger not only had to completely change her accent, but her diet too. See, Renee is normally a size 8, but she had to eat enough food to get her up to a size 16. To achieve this, she said her food staples included four slices of bread smothered in clarified butter and cream cheese, French toast with syrup and eggs benedict. But that's just the breakfast. Sounds like the dream, right? Apparently not. She said of the high-calorie diet: "I had a panic attack with all the specialists talking about how bad this is for you, long term, putting on that much weight in short periods of time and they're all saying, 'You must stop this now or you're going to die'."

We're used to seeing funny-man Steve Carrell at the helm of The Office, or making sex jokes in The 40 Year Old Virgin with Paul Rudd, so seeing him in this capacity was truly shocking. His eagle-like appearance (with the help of a prosthetic nose) and oddly disarming demeanour, this Steve Carell performance was unlike one we'd ever seen before.

​Carrell was portraying John du Pont, a millionaire philanthropist who killed Olympic gold medal winning wrestler Dave Schultz, played by Mark Ruffalo. It's been reported that on set Carell would avoid contact with Ruffalo and co-star Channing Tatum in order to really emphasise the kind of relationship he had with the characters on screen. But can we bring back Michael Scott now? We're scared.

C'mon, we couldn't just include one Johnny Depp film! Edward Scissorhands was Depp's first big film and also his first collaboration with Tim Burton - a relationship which would span the next 2 decades. Depp spent a total of two hours a day in makeup to get the deathly white palate and fake scars just right. After makeup it was into wardrobe, where he'd spend a further 45 minutes being sewn into his black leather body suit, and then another hour to get the crazy black hair to the right level of crazy.

8. Rooney mara - The Girl With The Dragon Tattoo

Rooney Mara landed the role of hacker Lisbeth Salander in David Fincher's film adaptation of Stieg Larsson's best selling novel. And once she'd got the role, she really committed to it: Mara dyed her hair jet black and donned an edgy cut, bleached her eyebrows blonde, got a whole load of piercings, including one right through the nipple. Shudder.

​After filming Mara removed most of the piercings, but kept the nipple one in case there were any sequels. We totally get it: you don't really want to go through the pain of a nipple piercing more than once in your life. Mara has also spoken about wearing a merkin - a wig for your lady parts - in order to be able to show that Lisbeth is a redhead who dyes her hair back. Now that's dedication to the story.

This is an oldie but a goodie. Vincent D'Onofrio, who was a total hottie in films like Mystic Pizza, put on 32kg of weight to play bumbling army recruit Gomer Pyle in Stanley Kubrick's Full Metal Jacket. His weight gain overtook Robert DeNiro's effort in 1980's Raging Bull.

​D'Onofrio said that once he'd gained the weight, people started treating him differently: "People treat you differently when you're fat. In restaurants, waiters were always condescending." D'Onofrio had to slim down pretty quickly one this film wrapped to film the comedy Adventures In Babysitting. D'Onofrio also had another makeover when he played Edgar ("SUGAR WATER") in the first Men In Black.

When Hannibal came out, Gary Oldman wasn't credited with being in the film despite having a main role. So because his prosthetics were so good there was no sign that Mason Verger was played by Oldman, bar a brief flashback in which his face is kinda blurry anyway. Oldman sat through hours of makeup to look like Verger, whom Hannibal Lecter had left paralysed and disfigured during a therapy session years before. It's prosthetic makeup and its best and most horrifying.

What do you think are the best film transformations? Let us know! @sofeminineUK

​​21 Actors Who Went Slightly Crazy For A Role

10 Older Actors Who Were Ridiculously Attractive In Their Day