10 Things You Missed When Watching Fifty Shades Of Grey

by Emmy Griffiths Published on 8 June 2015

If you got distracted watching Fifty Shades of Grey on the big screen, we're not going to blame you. Jamie Dornan's torso, Dakota Johnson's excessive lip biting and a Red Room of Pain will do that to a person. Luckily for you the digital download is out this week so you get the chance to watch Fifty Shades fifty times if you're so inclined. So just in case you didn't catch it the first time, here's 10 things you might have missed.

Though really, how could you miss that? The real question is how many times does he take his shirt off throughout the entire thing. Does someone fancy making a tally chart?

2. The script is bang on

See if you can spot the reference to Jamie's last role. Layers people, SO many layers.

Try not to miss her debut though - for all the time she's in it, she and her fabulous bob haircut shine!

4. It takes AGES to get to the first sex scene

Hands up everyone who thought this film was just crazy sex? Turns out there’s so much more to it than the goings on in Christian’s playroom that we don't even visit the playroom until Christian and Ana have gotten to know each other, and we have to say we kind of like it that way!

Not so much a fact but an observation. Who is he and where can we find him?

6. Kate pretty much sucks as a person

This was pretty hard not to miss tbh. Try to pinpoint the moment you realise she's actually a horrendous friend and housemate. Trust us, there'll be more than one occasion.

Seriously though, why DOES she still have a flip phone?! Do people even sell flip phones anymore?! Why doesn't Christian buy her a new damn phone?!

8. The women in Christian's office

WHO are these women and HOW do they look like that?! Thankfully he's not into that kind of thing. He likes innocent, lip-biting Uni students. Nice work Steele, you do you.

9.What actually happens to all the cable ties and masking tape

We don't want to spoil it but it's not what you were expecting...

Phones that aren't plugged in at the office, cancelling appointments so he can hang out with Ana, flying all over the place to find her, the list goes on! Seriously man, how DID you become so rich when you do NO work?!

The Fifty Shades of Grey movie is available to download on iTunes before its DVD release on 22nd June! If you’re curious for more – you’ll get major added extras including exclusive behind the scenes footage, music videos and a first look at Fifty Shades Darker.

Everyone Stay Calm: The First Image From Fifty Shades Darker Is HERE

20 Reasons You Should Give 50 Shades Of Grey A Chance

16 Reasons To Treat Yourself To 50 Shades of Grey Tonight

Need a quick fix before watching all over again? Check out these stills from the hottest film of the year! 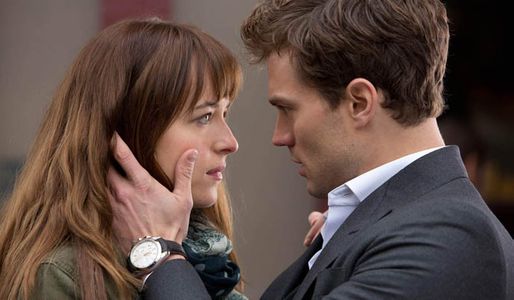 Emmy Griffiths
…
Promotions
For all the best videos, memes and shareable news!