by Helen Turnbull Published on 8 September 2016 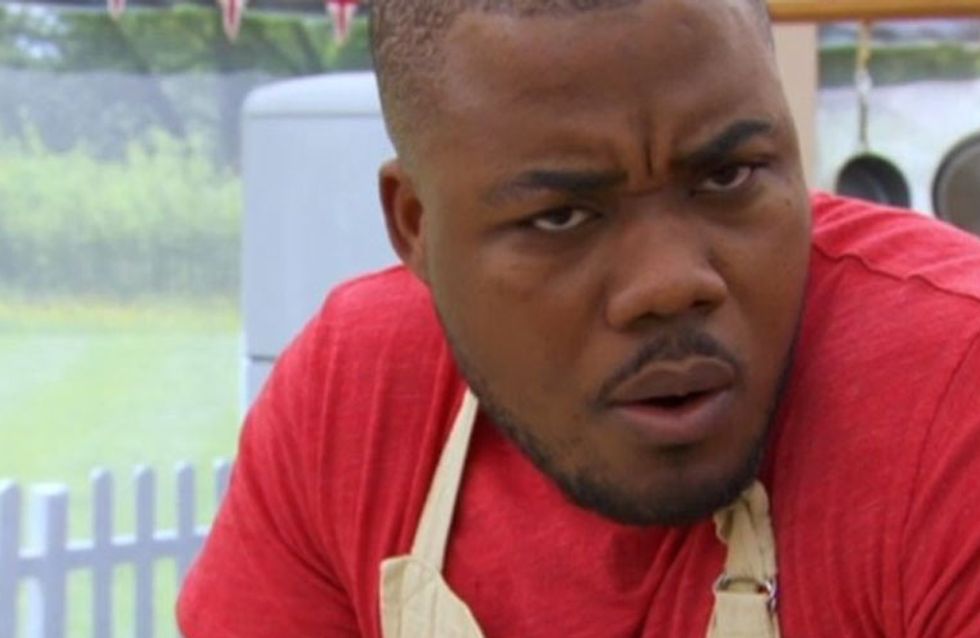 The Great British Bake Off as we know it is just days away from its pun-filled finale with Andrew, Candice and Jane beating off stiff competition to make it to the final three. Unfortunately for us, Selasi Gbormittah i.e. the smoothest amateur baker to grace the big white tent with his presence couldn't quite rise to the challenge during Pâtisserie Week and became the ninth casualty. It's fair to say Bake Off won't be the same without the baker-biker-banker's banter.

1. He turned Superman of the finance world in his introductory VT

He can take us for a ride any day

2. He charmed the once-uncharmable Paul Hollywood

No vanilla seeds. No problem.

4. He made us weak at the knees every time he licked his lips

6. Even he admitted defeat was embarrassing

He came last in the technical challenge boo hoo.

"My mum would be proud", he told the camera as he introduced his gingerbread childhood church in Biscuit Week.

8. He will forever be known as the king of piping cream

"I just need to give it a bit of a beat just to soften it up a bit" #GBBO pic.twitter.com/SQXYeojMG6

9. Even a piece of chilli was too hot for him to handle

When you realise you should’ve gone for a korma instead of a madras… #GBBO pic.twitter.com/0PeSz5pYN8

10. He made it totally OK to lie on the tent floor

11. He's a master at kneading dough

12. He also made smelling pans 'a thing'

When you can’t get enough of your partner’s new fragrance... #GBBO #BreadWeek pic.twitter.com/h98tttoVhd

When the sister visits and u r both bored at home! Fashion week here we come! 😎😏 #easterweekend #zoolander #MAGNUM @king_andinam @loria_g

14. He casually mentioned he had a girlfriend when he realised he was the nation's biggest crush

Can you hear that? It's the sound of hearts everywhere breaking.

15. He proved himself to be a flipping awesome pancake tosser

The flips don't lie. Here's how to make your own pancake: https://t.co/rxsFHsdfmP#PancakeThursday #GBBO pic.twitter.com/O4PrZYqrl9

16. He giggled about how 'humongous' his Yorkshire puddings were

17. He embodied the GBBO spirit by helping Kate in the final minutes of the Showstopper challenge in Batter Week

Admittedly, all he did was hold the plate but every little counts <3.

18. He throws an epic GBBO Viewing Party every Wednesday

20. He fed Benjamina his lemon curd

21. He didn't pretend to know what the fancy Technical bakes were

Paul and Mary would like you to make a… marjolaine! #DessertWeek #GBBO pic.twitter.com/Hu1VK4Bfmk

22. He lost his chill during Dessert Week, albeit briefly

23. He straight up asked Mel if he could bribe her into asking Mary and Paul for more time during the first Tudor Week challenge

24. He made no secret of the fact he hated technicals

But still refused to let the pressure get to him in the quarter final.

You could have fooled us, Selasi… #GBBO pic.twitter.com/3rrrfLgmfc

25. He formed a sisterly bond with Benjamina

26. He and his girlfriend are super-cute on social media

Tux not ready to be put away yet apparently.Thanks for ur hospitality Rob and Sarah💃🏿!Had a blast.Half marathon in the morning. God HELP ME. pic.twitter.com/YqFFNcDIm9

27. He approached the semi-final in true Selasi style

"I've never made palmiers before but it's alright."

29. He was finishing Mary's sentences by his final week

Interrupting Mary Berry. A crime worse than a soggy bottom on #GBBO! pic.twitter.com/DPfdRLcV9I

30. He spontaneously auditioned for Mel and Sue's job

"Are you doing me out of a job, mate?" a less than impressed Mel responded.

He came. He baked. He sweated. We’ll miss you, Selasi! #GBBO pic.twitter.com/JwiL7tgqas

32. He flirted with Jane

RT if you want to give Selasi a big hug right now. What a guy. 😭 #GBBO pic.twitter.com/KDZPKRONFA

35. He made the entire nation cry with his emotional statement on his exit

36. He's been hanging out with GBBO's second best baker... VAL

From London to Somerset!ROAD TRIP? Seeing my favourite pensioner in Wells. 😉 🏍 perfect excuse and weather to get on motorbike pic.twitter.com/37aWweLVhe

Who do you want to win GBBO? Head to Twitter @soFeminineUK to let us know all your GBBO-related thoughts.

Every Single Innuendo From This Year's GBBO