Every Single Innuendo From Mary Berry's Last Bake Off Series

by Helen Turnbull Published on 6 October 2016 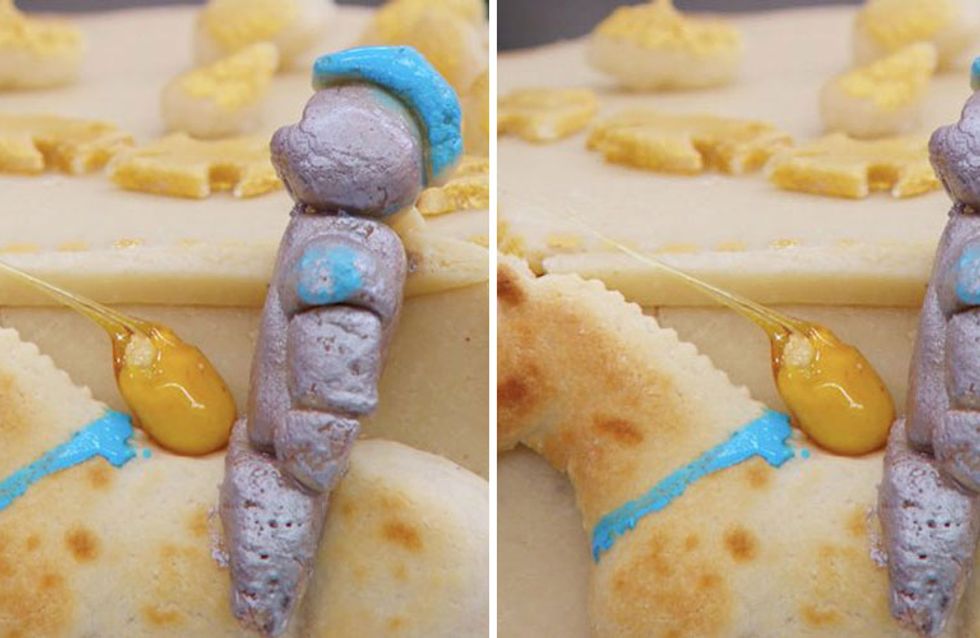 Baking was a pastime reserved for prudish housewives in pre-Great British Bake Off times but innuendos have become an integral part of the BBC cake-making contest and we love it all the more for it. And while we've come to expect sexually-charged statements from presenters Mel and Sue, judges Mary and Paul and contestants alike, the latest batch of amateur bakers have more than risen to the challenge. The proof is in the pudding...

Sounds a lot like a word that begins with j and ends in zz, you know the one. This was Sue Perkins' attempt to spur on the nervous bakers during the very first bake of the new series.

2. 'To give it more of an adult flavour'

We dread to think what Star Baker Jane Beedle meant when she uttered this during the debut Showstopper challenge.

Poor old church minister Lee Banfield was oblivious to the racy connotations of this statement as he struggled to make his 'drizz the shiz' ten minutes in.

Only for Paul Hollywood to respond to his concern with this filth. It's probably a good job he was voted off first.

Val Stones (i.e. the sassiest contestant to bless the tent with her presence) strikes again. It's good to know we aren't the only ones with a soft spot for the bearded Scouser.

We really like the cut of Val's jib #GBBO https://t.co/GbbzB5M8Ud pic.twitter.com/etOFqT3jpg

The kind that grow on trees, not the other kind. Freshly grown by Kate Barmby, no less.

10. 'I've got my swallow dress, my swallow earrings I just love swallows'

Kate (i.e. the Ian of series six) co-ordinated her baking uniform to her baked goods and the Internet couldn't help itself.

You know you’re made for Bake Off when you coordinate your clothing with your showstopper… #GBBO pic.twitter.com/AfBPa7EOtr

New drinking game: Have a shot every time Paul uses the P word.

SUE PERKINS REFERRING TO CAKE AND NOTHING ELSE.

Mary Berry exclaimed as she witnessed Paul dunk a Jaffa Cake (!?) in a cuppa.

Mary Berry does not approve of dunking. #GBBO😱 😱 pic.twitter.com/EoQFwSmU9X

15. 'There’s nothing lingering in the mouth'

Twitter lost its sh*t when Mary uttered this obscenity. Spoiler: she was referring to Candice's ginger-cake carpet which was part of her Biscuit Week Showstopper.

Variety is the spice of life. #GBBO pic.twitter.com/aNLVkWzAho

17. 'I think your sister tastes lovely'

Things you only hear on Bake Off… #GBBO pic.twitter.com/DoU27ha0p9

Poor Jane had no idea of the connotations of this innocent statement.

MICHAEL'S MIXTURE, NOT ANYTHING ELSE.

Rav's mixture was also him problems.

Candice walked right into this one tbh.

Benjamina and her bakes.

25. 'We've had a problem with finishing before'

Mary needs to wash her mouth out with soap in time for next week's episode.

Only on Bake Off… #GBBO pic.twitter.com/jRwN41bhag

31. 'They could be wetter to allow them to grow'

Paul Hollywood on a batch of less-than-ideal Yorkshire puddings.

33. 'The fat has sort of impregnated it'

The first time the word 'impregnated' graced the tent with its presence, thanks to Mary Berry in Batter Week. She only went and said it again mere minutes later.

What a compliment! #GBBO pic.twitter.com/psVWauuHH0

38. 'If that means some hand-touching, that's alright with me'

Whatever you need to do to perfect your pastry, Andrew.

I bet they do

41. 'It shrinks and then it looks horrible'

You're telling us, Jane

42. 'It's good to get your hands in and give your sausages a good squeeze'

"It’s good to get your hands in and give your sausages a good squeeze" #GBBO pic.twitter.com/npJqHhlhya

"Feel the weight of that, Mary" #GBBO pic.twitter.com/FcGbOfrqFp

You know Mel wasn't the only one thinking this about Selasi in Dessert Week.

A sponge is meant to be spongey, not bulgy. Isn't that right, Tom!?

Is there something you're not telling us, Mary?

47. 'My nuts are looking nice and golden brown'

Unfortunately, not even golden nuts could save Tom after a disastrous Dessert Week.

That approach seemed to work for Jane.

Not even her cracking puns could save Benjamina from being booted out of the tent in Tudor Week.

'Them' being Jane's pies, obviously.

52. 'Exactly like me, Mary. Hard on the outside. Soft in the middle'

Some context: the quarter-finalists were tasked with making marzipan Showstoppers in Tudor Week. Andrew opted to make jousting knights but timing difficulties meant one stood to attention more than the other.

55. 'At least it's not leaking out which it did mid-week'

This for dirtiest innuendo of the series. Cheers, Paul.

Candice's ​savarin that is.

Is this or is this not the most sexually-charged GBBO series yet? Let us know your thoughts @soFeminineUK