Tears, Tiers And More Tears: Everything You Need To Know About The GBBO Final

by Pascale Day Published on 8 October 2015 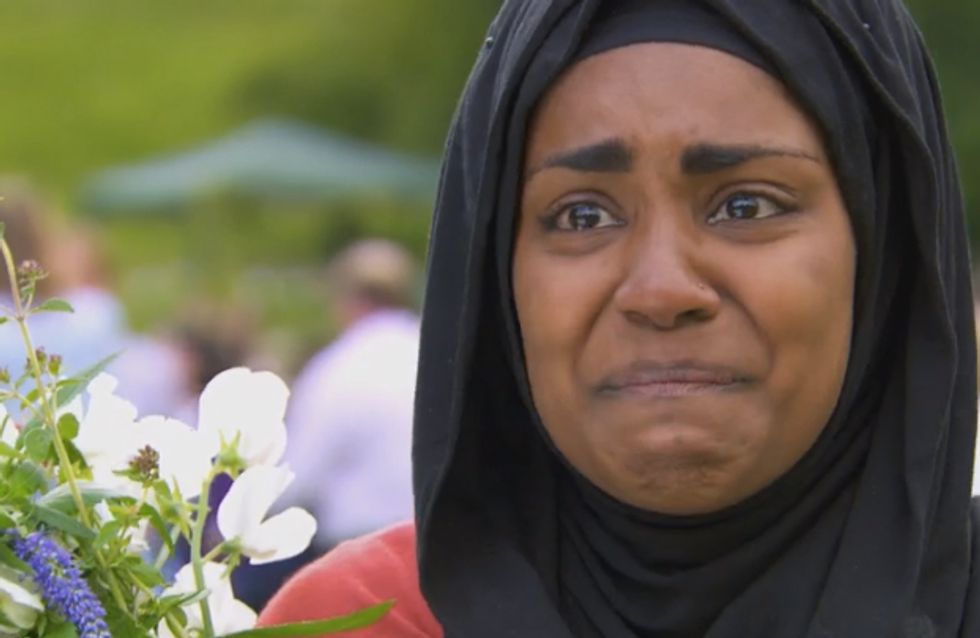 We have just about finished drying our tears with a slice of lemon drizzle cake and are ready to give you the full run-down of what happened in last night’s emotionally charged Great British Bake Off final. And what a final it was: there was panic and elation, there were culinary disasters, and then there was the secret ingredient to the whole darn thing: Mary Berry’s tears. And, of course, there was some rather delicious baking….

And what a winner she was! It was clear Nadiya was going to win right from the first challenge. Nadiya, scared at first, confident to end, had been a favourite for a few weeks now, overtaking nice guy Ian as star baker. And there she was, piping away calmly, baking three wedding cakes without even breaking a sweat. It could have been a close one if Ian had coped better under pressure and had remember to put the correct ingredients into his bake. I mean, it was obvious Tamal wasn’t going to be the winner, but it was nice to have the eye candy in the final that was in human form and not cake form. Nadiya was a beautiful and deserving winner. You go girlfriend!

2. Everything seemed so much more TENSE

There was a lot of forehead rubbing and noses against oven doors. At some point or another everyone struggled with their maths and it felt like possibly the end of the world was coming. Tamal knocked over the utensil holder and a nation screamed. Nadiya decided to make half her iced buns round instead of batch-baked and oval. Was it a mistake? Oh god no one knows!

Not a dry eye in the house. It was expected from Nadiya. It was sweet from Tamal. But Ian? This is the guy that’s spent the whole time being happily indifferent and content at all times. If something goes well it’s “good” and “nice” but if something goes wrong it’s “bad” but “oh well”. In his talking head he always seems slightly uneasy talking about his feelings. His emotional side seemed like an impenetrable fortress. Turns out you just need to get him to back five identical carrot cakes to open those flood gates.

Perhaps the biggest surprise in the crying stakes was our very own Mary Berry, stoic no more, shedding a tear for Nadiya and her win. The show usually ends with Mez Bez summing up the winner’s achievements. Normally, Mary can get through it sounding genuinely thrilled for the contestant. But this year, obviously so taken with Nadiya and her win, she couldn’t finish it. Her voice cracks and she has to walk out of shot in order to finish her blub. There’s only Paul left now. Next year we’ll crack him.

Paul hovered over the contestants asking them if they were ok, but in that Paul Hollywood way he does, blue eyes piercing the soul, that not so much says “are you ok?” but states “you better be ok”. The panic caused Ian to forget to put sugar in half of his iced buns, leaving them as just bread rolls. Those of use who have experienced shop-bought iced buns will think bread rolls covered in icing sounds about right, but not to Paul. Then Tamal’s crème patissiere didn’t set in time and so he had to forgo the creme in the buns altogether, making them simply just jam rolls. It still managed to impress Mary and Paul though, because this was filled with delicious, citrusy marmalade made by the handsome fella himself, which is what separates it from the tedious jam sandwiches your mum used to give you as a child when she couldn’t be bothered to make a real sandwich. Nadiya knew no struggle at this point as she calmly piped sour cherry jam in neat lines across her creme, that ended up looking and tasting delicious.

6. Pastry came back to haunt all of them

Like some cruel, cruel joke, Mary and Paul decided that the finalists should make six raspberry mille-feuilles for their last technical because they had all suffered with pastry at some point in the past (which is a strange sentence in itself). Mille-feuilles are crumbly sheets of pastry, stacked up and separated with raspberries and chantilly cream. They’re the ones that are incredibly hard to get in your mouth whilst continuing to look elegant at afternoon tea. This was probably the most tense task of the week. There was no jovial moments, just sheer panic. The pastry was crumbling under the knife, the sizes weren’t right, Tamal was rubbing his face a lot which is never a good sign. It was Nadiya once again who came out on top, donning the pastry crown once again.

8. We got a glimpse into their lives

One of my personal favourite bits of the Bake Off is being transported into the everyday lives of the bakers. We see Tamal messing around with his sister, who, when talking about her beloved brother, gets as far as saying “Whatever happens….” before breaking down and reprimanding herself for crying before she’s even really said anything. We’re hoping that the end of that sentence was going to be “we love him no matter what” and not “if he doesn’t win he’s going to get kicked out of the house.”

​A glimpse into Nadiya’s life shows three adorable kids running around and excitedly setting the table, which was adorable. Ian’s home life shows us that he doesn’t really need to win the Bake Off. He has an actual zip line in his back garden. He’s already winning at life, man. Everyone professes how proud they are of the final three and that they love them, which makes you wonder if they know that all the winner gets is an engraved cake stand.

7. Each had their own coping mechanism

Tamal teased Nadiya from the kitchen area behind by gently reminding her of her failed bakes in the past. Nadiya has her extremely expressive face to help her cope. Ian was just quiet. Even sue's goading could not coax a panic attack out of him.

9. And after all this you realise why the Bake Off is so popular.

The emotional peak of this year’s finale perfectly sums up why the Bake Off proved - sometimes inexplicably - popular. It is a show that is void of the X Factor drama, of deceit and game-playing. It’s just a bunch of people, who love to bake. They are there for the competition, but more so to practice and hone their skills, and to make friends. This is the rare exception where it actually is about taking part, and not so much the winning. I mean, a bunch of flowers is nice, but a lesson learnt is nicer. Each contestant wants the other to succeed, and the real prize is the experience, and the confidence it gives. As Nadiya says after her win: “I’m never going to put boundaries on myself ever again. I’m never going to say I can’t do it. I’m never going to say maybe. I’m never going to say I don’t think I can. I can and I will.”

​It celebrates all that is right with British culture, and all that we can be proud of. It is both Great and British.
​

What did you think of the Bake Off last night? Let us know! @sofeminineUK

Pitta Pockets And Fondling Fondant: 8 Things You Need To Know About GBBO Episode 5

​​​All Hail Ian, The Cheesecake King: 10 Things You Need To Know About GBBO Episode 4