15 Brilliant Movies To Watch With Your Dad

We know exactly how to make the most of spending quality time with your Dad. Settle down on the sofa, make him a cup of tea in his 'World's Best Dad' mug, and stick one of these movies on...

A washed up father dressed up as his ex-wife’s housekeeper in order to spend more time with his three children, becoming his wife’s confidante and watching her blossoming relationship with the handsome Stu in the process.

2. Cheaper by the Dozen

Make your father grateful he never had twelve children (unless he did have twelve children in which case it’ll be like watching a documentary) as Steve Martin tries to handle his ginormous family when his wife goes on a book tour.

Escaped convict turned repentant do-gooder Jean Valjean adopts a young girl whose mother once worked at one of his factories. He raises her, never telling her the truth about himself, and goes to the ends of the earth and back for her one true love, Marius.

Doppelgangers Annie and Hallie meet at a summer camp to find out that they’re actually twins, and that when their parents divorced they each decided to raise one of the girls.

As a result, the newly reunited twins decide to swap identities to attempt to bring their parents back together.

Merida and her dad are basically BFFs. He accepts her for who she is and teaches her how to shoot her bow and arrow and they basically have the best relationship ever. It’s her Mum that’s the problem (lol).

Marlon the clownfish has always been extremely protective of his only son Nemo, who when Nemo is kidnapped by a scuba diving dentist, Marlon goes across the ocean to rescue him and learns a few things about being a father along the way (mostly from a turtle named Crush).

Only watch with your father if you both want to sob your little hearts out. Sara and her father only have each other, so when he leaves her to fight in WW1, Sara must try to handle her new surroundings.

Needless to say, tragedy strikes and we can’t think about it without dying a little inside.

Mufasa might be Hollywood’s greatest father, and he is a lion. An awesome, majestic lion who gives out one pearl of wisdom after the other. Thing is, we all know what happens in this, so we hope you and your Dad are ready to ugly cry over this one.

Adam Sandler is a washed up law school drop-out who finds himself stuck with his housemate’s unknown child but eventually learns how to be a good dad and grows to love little Julian/Frankenstein while trying out his own unique parenting method.

Will (Hugh Grant) is a total freeloader who does basically nothing with his life but forms an unusual friendship with Marcus, a teenager who continues to come round his house to avoid going back to a troubled home and being continuously bullied at school. Will eventually becomes a father figure to Marcus, and the pair help each other out against the odds.

Fletcher Reed (Jim Carrey) is forced to tell the truth for 24 hours after his son is fed up of his BS attitude and wishing on a cake that he'd stop lying.

There’s a hand that turns into a claw and a LOT of overacting fun from Jim and you’ll have a good time watching it, honestly!

A super villain adopts three orphans as part of his dastardly plot to steal the moon, only to find out that they are really, really cute and obviously falls in love with them. As he grows as a person, he has to make a decision over what he really wants, especially when his plans to steal the moon clash with their ballet recital.

Big Daddy and Hit Girl are the father daughter combination you know you and your dad could be if you put the effort and didn’t mind getting shot at then going for ice cream sundaes. Big Daddy has been raising his daughter as an assassin and the pair get excited about things like jet packs and hot chocolate. It's an adorable relationship.

14. To Kill A Mockingbird

Atticus Finch singlehandedly raises his two children Jem and Scout to be good people while defending a black man accused of rape in a prejudiced Alabama. Atticus is basically a hero in every single way, and you will want to name your children after him.

Three men have to put their usual misanthropic ways to one side when a baby appears on their doorstep. Along with three guys, one being Tom Selleck, adorably learning to care for a baby girl, there's also some serious drama with a package of heroin and powdered milk confusion.

Choose which film you'll be watching on Sunday 21st June! 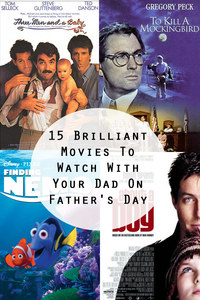 What are you doing on Father's Day this year? Tweet us @sofeminineUK!