by Pascale Day Published on 31 December 2015 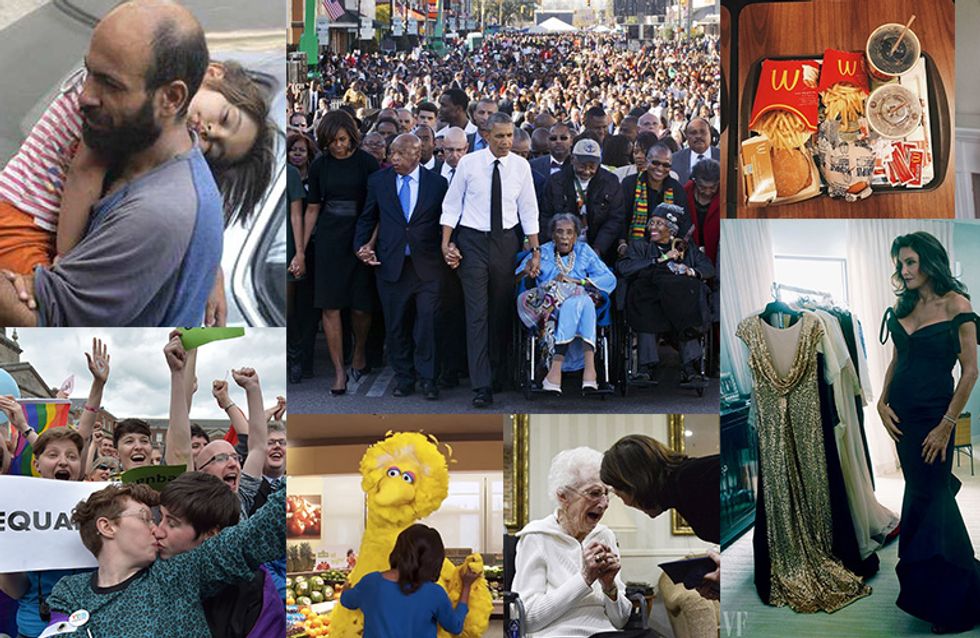 We've had some bad, horrible, terrible news in 2015. But what we should remember from this year is all the great things we witnessed: the humanity, the hilarity and the kindness of the world in 2015. Let's try and make 2016 the kindest year yet!

1. Woman rescues abandoned cat from shelter and takes it on a bucket list of adventures

When Adriene Buisch saw 21 year old moggy Tigger at a shelter in Baltimore, she knew he was The One. And for whatever amount of time he had left, she was going to make it the best of it. After finding out he has kidney failure and a tumour, Adriene started compiling a bucket list for Tigger. She has taken him on walks on the beach, and then next stop is a trip to Florida to visit family for Christmas.

2. Bruce Jenner comes out as Caitlyn

Caitlyn Jenner, formerly known as Bruce Jenner, came out as a woman in a "20/20" interview on ABC with Diane Sawyer. "For all intents and purposes, I am a woman.” Said Jenner, who was previously married to Kardashian Klan matriarch Kris Jenner. Caitlyn used her position as a transgender woman to bring the conversation of transgender individuals into the spotlight: “My whole life has prepared me for this moment so I want to take advantage of it and do the right thing.”

To mark the 50th anniversary of the marches from Selma to Montgomery, Prez Obama and the First Family joined thousands of people in Selma, Alabama. The march was a symbol of remembrance for the men and women who came out in support of voting rights for African Americans in 1965 and were beaten down. Obama then delivers a pretty powerful speech on the anniversary - you can take a look at that here, but beware, you will need tissues.

A woman chooses possibly the best moment to propose to her girlfriend - right in the middle of an interview with Ryan Gosling for his director's debut, Lost River. Ever the gentleman, Ryan hands the microphone to the lady in question so the whole room at South By Southwest can hear her emotional proposal. As if we couldn't love Gos any more - swoon!

5. Ireland became the first country to vote in favour of same sex marriage

Ireland peaked as the coolest country ever in May this year when it voted in favour of same sex marriage with a majority vote of 62%. Ireland is the first country to legalise same sex marriage by popular vote. A country once dominated by the Catholic Church showed it was done giving in to the instructions of its religious leaders, and the result? A bloody massive street party.

6. Germany give refugees a warm welcome

After deciding that they would allow syrian refugees entry to Germany, many German natives came out to celebrate the arrival of their new neighbours. As we all know, refugees live through tremendous struggle everyday, including prejudice, Islamaphobia and racism, so to see so many people turning out to applaud and hand out food and water to the refugees was certainly a beautiful sight amidst all the chaos of Syria's current troubles.

As if we couldn't love Robert Downey Jr anymore, this interview with Mini Thor just makes us melt. Mini Thor asks all the most important questions - "What is your favourite food?" - and RDJ answers with all the wisdom we thought he would. Just watch it, ok? It's adorable.

Hundreds of locals came to see the Obamas at Halloween this year, including The Pope. Only, he was much smaller. And much cuter. When Baby Pope rolled up in her popemobile, Prez Obama lost it. The baby in question is Rosalia Kildee from Silver Spring, Maryland, and her funny get up won over Mr Obama, who told her she'd got first prize for best costume. Watch the sweet interaction below.

When Furious 7 won the award for Best Action Adventure Movie at the Teen Choice Awards this year, Vin Diesel used his time on stage to talk about good friend and castmate Paul Walker, who died in 2013 when the car he was a passenger in crashed into a concrete lamppost, and Walker's daughter Meadow, who he says helped the cast and crew get through the filming of Furious 7 without their friend.

In one of the best sketches of the year, Seth Meyers brings Jon Snow to his dinner party, making for a rather sombre affair...

11. Sa'fyre Terry gets Christmas cards from around the world

Eight-year-old Sa'fyre Terry was badly burned in an unsolved arson attack on her home in 2013 where she lost her father and three siblings. Her father, David Terry, died when he used his body to shield Sa'fyre from the flames, but 75% of the girl's body was burned, and the damage meant her right hand and left foot were later amputated. Sa'fyre, now orphaned and living with her aunt and caretaker Liz Dolder, only wanted one thing for Christmas this year: Christmas cards. So when Liz posted on Sa'fyre's Facebook page 'Safyre Schenectady's Super Survivor' asking people to send cards from where ever they were in the world, little did they know they'd soon be inundated with cards for the eight year old.
​

12. 'Dancing man' fat-shamed online by cyber bullies gets his own party

Sean O'Brien was "fat-shamed" on social media when a video of him being mocked whilst he danced at a concert went viral. But, social media once again proved itself to be a tool of positivity after the social media campaign #FindDancingMan was used to track down his identity and throw him a huge party in LA. You can find out more about Sean's story here, but in the meantime here's a picture of the man himself enjoying the party thrown in his honour.

Margaret Thome Bekema was supposed to graduate high school in 1936, but was forced to leave school to take care of her mother and three siblings when her mother became sick with cancer. But this year Margaret was given an honorary diploma from Grand Rapids Catholic Central High, the school she attended back in 1936, 79 years after she was originally supposed to graduate. Bekema said of the occasion: "I thank you from the bottom of my heart. I had to quit school to take over the family. It was hard, you have no idea how hard that was. I loved high school and I had lots of friends."

14. Michelle Obama dances with Big Bird in a supermarket

In one of the more surreal videos of the year, Funny or Die's video features Billy Eichner as the host, with Michelle Obama - or Flotus (First Last Of The United States) - as a contestant along with Big Bird. Highlights include a game entitled 'Ariana Grande or a Carrot?', Lady Obama slow dancing with Big Bird, and Billy Eichner being pushed in a trolley by Michelle as he reads Gwyneth Paltrow's Oscar acceptance speech for Shakespeare In Love. It's weird but worth it. You can watch it here.

Abdul Halim al-Attar was at the centre of a viral video after he was photographed selling pens whilst holding his sleeping daughter on the streets of Beirut. al-Attar is now the proud owner of three successful businesses after an online Crowdfunding campaign raised $191,000 in his name.

This year Viola Davis became the first African-American woman to win an Emmy for best actress in a drama for How To Get Away With Murder. Her speech was powerful and focused on diversity in Hollywood.

After the attacks in Paris on 13th November 2015, Parisians opened their doors and offered shelter to those stuck on the streets of Paris amid the atrocities. #PorteOuverte, french for 'Open Door', was used on Twitter to allow people to contact those who are looking to get to safety. Like the #IllRideWithYou hastag that came before it, these outpourings of compassion show social media at its best.

Hey tourists in #Paris if you need help or some place to sleep around Jussieu 5th arrondissement, my door is open. #PorteOuverte #OpenDoor

18. Teenager invents electronic device to help his friend that was struck by lightening

Jacob Smilg, an 8th grader from Ohio created a video board for his friend, Ethan Kadish. When Ethan was struck by lightening in 2013 at summer camp, it nearly killed him, leaving him in a wheelchair, unable to walk, talk, eat or go to the bathroom on his own. Jacob's device is an electric video board that allows Ethan to lean his head to the left for Yes and to the right for No. Whatever answer he chooses, the board will display the answer. Ethan's mother said it was the most he has been able to communicate in almost 2 years.

Oh man. One of the funniest moments by far. Richard Blackwood was a guest on Sunday Brunch we he was asked to zest a lemon during a cooking segment. ​"You want me to squeeze the juice in?" he asked the chef. "Just the zest" he answered. But Richard started slicing the lemon anyway. He was handed a zester, but still didn't understand the concept as he proceeds to zest to juicy side of the lemon he had just cut in half. Watching Blackwood pretending to know what zesting means is possibly the best things from this year.

Florida has embraced the spirit of giving early! Torie Keene was paying for her meal at the drive-thru when she told the cashier that she wanted to pay for the meal behind her. When the cashier told the next car that their meal had been paid for, the passenger was so happy she decided to pay for the meal behind her, and thus the chain was started. Talk about a happy meal! We're hoping the drive-thru shut after the 250th person, and not that the 251st person decided to keep the meal for themselves.

What's been your favourite nice moment of 2015? Let us know! @sofeminineUK