21 Celebrity Friendships We Want To Be A Part Of 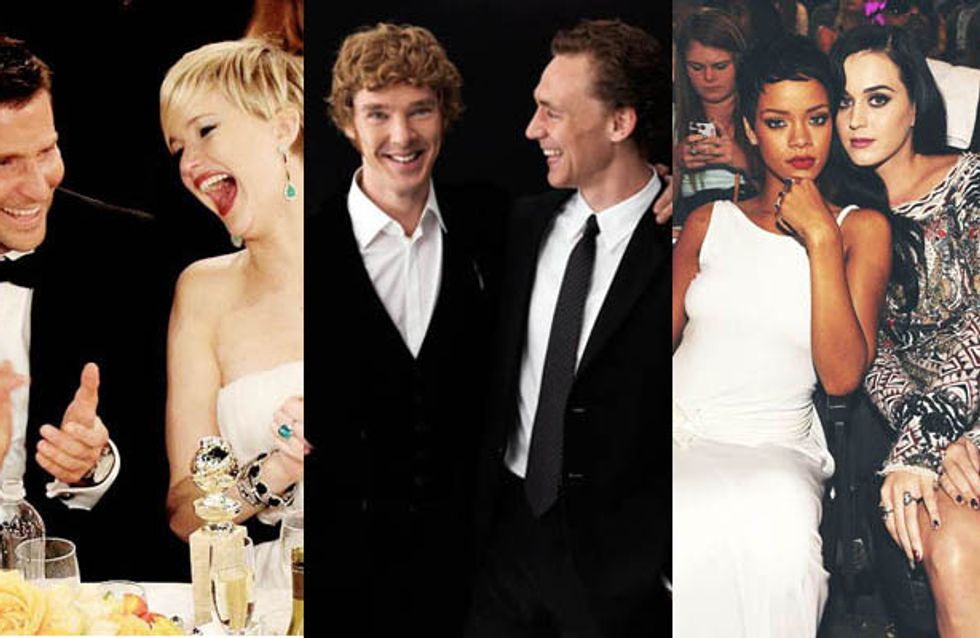 Last week we witnessed the moment Brad Pitt and Matthew McConaughey realised they were neighbours in New Orleans. The pair chatted to each other from across the street before Brad thought Matt might need a bevvie and tossed a beer over to him, and it was glorious. After this friendship revelation, what other friendship circles shall we add to our list to become a part of?

So here they are. Brad and Matt. Just two neighbours, getting along...

What other celebrity friendships have been going on?!

They might never be a loved-up couple, but Bradley and Jennifer’s BFF-status is everything we could ever want and more!

Appearing in a romantic comedy with each other once every ten years, this pair has decade’s worth of friendship between them. They even don’t mind making fools of themselves on chat shows together. Behold…

These two have been pals ever since they played Rachel and Monica in Friends. Jen is even Godmother to Courteney’s daughter Coco!

This pair has ten years of friendship under their belt and they've even hosted the Golden Globes together twice. Their chemistry is almost tangible!

This pair have been friends since childhood and got their big break co-writing then co-starring in Good Will Hunting. Can you imagine being launched into fame and fortune with your best friend by your side? It sounds amazing!

Donald and Zach play the ultimate bromance of Turk and JD in Scrubs, but apparently these two are just as adorable in real life. Apparently Donald used to take him to a lot of parties and taught Zach how to ‘give a proper hip-hop hug’. We don’t think we want to know…

This pair were roommates in college and have been great friends ever since.

This pair aren’t just BFFs in Bridesmaids, but in real life too! We like to think they have the exact same relationship in real life as in the film, but perhaps with a little less food poisoning…

Rihanna planned KP’s Vegas bachelorette party and gave her a Valentino bag for Valentine’s Day! If that’s not friendship we don’t know what is!

These two are such good pals that Anne thanked him in her speech at the Oscars after having won Best Supporting Actress, and the pair even did a skit together the year before when Hugh hosted the show!

This pair hung out together at Kanye West’s concert in LA, and frequently talk about their respect for each other.

Tom said of Benedict: “He’s one of my best friends. It’s as simple as that.”

It’s like the ultimate fangirl friendship. Someone hold us.

The pair played best pals in X-Men and have been real life buddies ever since!

Dokota and Kristen became tight after meeting on the set of The Twilight Saga: New Moon. We think all involved in Twilight should probably stick together! You know, for support…

And now for the Swifties. Who said celebrities could only have one famous friend?! Taylor Swift gets through celebrity BFFs the same way she does celebrity BFs! (Quickly. Very quickly.)

Taylor took the young singer under her wing recently, and Lorde went along to her 24th birthday party, even though these two couldn’t be MORE different!

It’s no secret that Taylor and Ed adore each other. They just need to realise it’s actually true love, and all shall be well.

Selena and Taylor gush about their friendship to anyone who will listen, and it sounds like they're bound over being over-excited, slightly crazy popstars.

The Modern Family star and TayTay have been hanging out a lot recently!

HOW DOES SHE HAVE THIS MANY FAMOUS FRIENDS?!

Lena Dunham was a big fan of Taylor’s before she became famous. See? IT COULD HAPPEN TO US TOO!

They show up to perform at each others concerts all the time! And we are not jealous at all...

Feeling a bit jel now? Which celeb would you most want to be best friends with? Tweet us @sofeminineUK