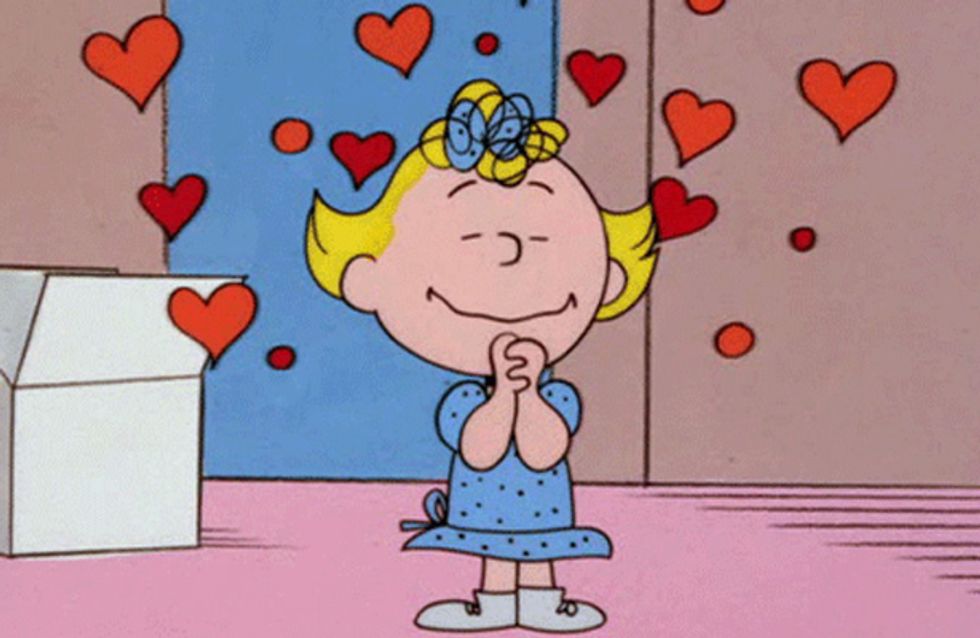 What do George Clooney, Brad Pitt and Ryan Gosling all have in common? They ooze with charm, ostentatious good looks and sensational abs. Everything about them indicates that we should be attracted to them, but they are by no means our only celebrity crushes. So...what is it about these other wonderful weirdos that we love so much? How have they managed to get under our skin quite so deeply?!

Why we love him: David Mitchell is awkward, posh and distinctly lovable. It’s probably his self-deprecating nature that attracts us - he vocalises every insecurity he has and we just love it.

Why we love him: From playing Forrest Gump to portraying Walt Disney, his voice is velvet and gravel and chocolate for the ears all at once and his acting prowess is unmatched. Oh, and he loves old typewriters. You've got to love a man with a hobby!

Why we love him: Can’t we just pick him on Take Me Out? No likey no lighty? LIKEY! WE LIKEY!

Why we love him: He is firmly at the top of our hot ginger list. Firmly. He’s so softly-spoken as well, and you never really know what he’s thinking. We love us a mysterious ginger.

Why we love him: He’s so dopey looking and yet there’s something totally loveable about him. Amanda Seyfried knows what we mean, the pair have been going out since October 2013! He's pretty cute - except when he ugly cries, obviously.

Why we love him: He is oddly tall, hilarious and cannot seem to get himself a girlfriend. Perhaps we think we’d become his girlfriend if we met him? Maybe? Yes?

Why we love him: He just doesn’t give a sh*t, does he? We appreciate that attitude.

Why we love him: How could you NOT love him? He is utterly adorable. We're not even ashamed to admit we fancied him in Anchorman.

Why we love him: He thinks we’re beautiful and he is legitimately hilarious on Twitter. Keep on tweeting handsome!

And no mortgage. RT @hettjones: James Blunt just has an annoying face and a highly irritating voice

His style is sheer madness, yes, but there’s something about that little ponytail and dangly cross earring that does it for us. We can’t explain it.

He’s a silver fox, and for God's sake he’s the new Doctor! You sort of have to love him for this sole reason.

See above. Matt Smith might have kind of weird hair and kind of a weird chin, but once you’ve played an iconic British role it's the law that you become attractive by osmosis.

James is slightly dorky, silly, and has fan girl freak outs about David Beckham as much as we do. Let’s face it, the man is freaking charming.

Jamie is a skinny, Draco-Malfoy-lookalike lovesick puppy, but for some reason he keeps getting those girls! He plays up to his strengths, and it totally works.

It took a while to warm up to Greg’s Fresh Meat character Howard, but after demonstrating his thoughtful and sweet nature, we couldn’t help but develop a little crush!

The nerdy comedian is quite vocal about how he thinks relationships can’t last and love is a lie. This only encourages us to prove him otherwise.

Everything about Ed Norton suggests you shouldn’t really find him that hot. He sort of looks like a baby bird. However, inexplicably we also find him to be sort of perfect? We know, we don’t get it either.

From playing Colonel Brandon in Sense and Sensibility and Snape in Harry Potter, Alan Rickman has successfully procured our eternal devotion.

OH BENEDICT WE LOVE HIM. But why?! Why? He sort of looks like Beaker from The Muppets, but he’s SO BEAUTIFUL with it.

He looks like he’s been carved from marble and speaks how we imagine Zeus would. We can imagine it’d be intense dating him, but so WORTH IT.

He’s so goofy and sweet. Got to love a man with a quick-wit!

Nathan Fillon is admittedly strapping and a lot of people are die-hard fans of him after he played sexy Mal in Firefly.

Jennifer Aniston fell for Vince’s boy-next-door persona, and so have we!

Are any of these guys up your street? Tweet us @sofeminineUK