by Pascale Day Published on 11 December 2015 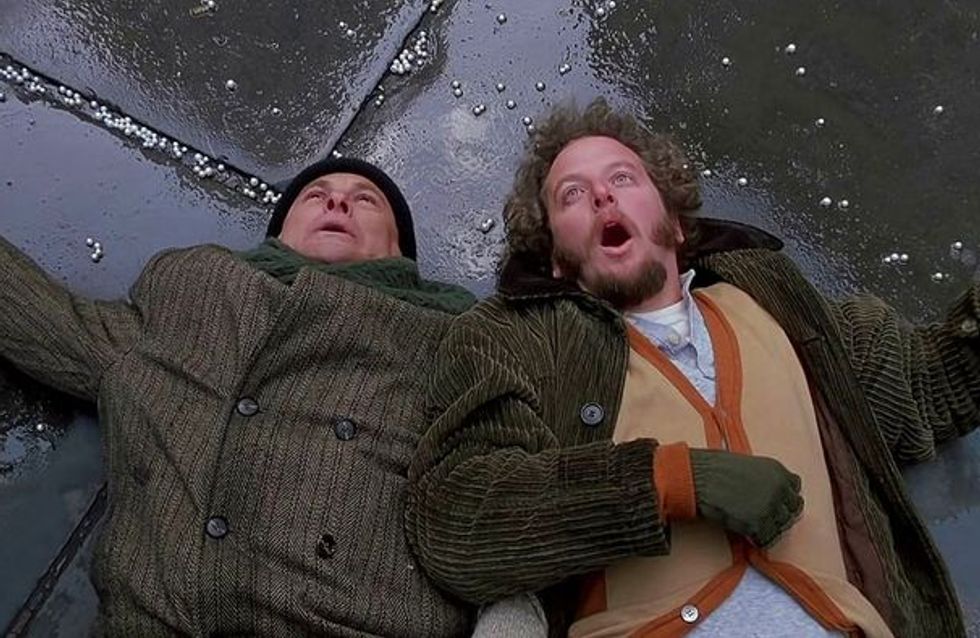 Right, let's get one thing straight: Christmas villains get a bad rep. Every year we stand by and watch Kevin's attempts at murder, Ebenezer getting life lessons in the middle of the night when he should be sleeping, and Bill Murray forced to enjoy Christmas when all he's tryna do is give the people what they want. C'mon people, we all know that these guys aren't the real villains - here, I'll show you.

So everyone thinks Harry and Marv are the bad guys, huh? Well, if you think this then you would be wrong. Majorly, hugely wrong. Think about it: Harry and Marv thought the McCallister's house was empty. Sure they were going to rob them blind, but at least they had the decency to do it when no one was in, to avoid causing the family any trauma. But those McCallisters, they bring the trauma all on their own.

As much as our parents wish that they'd left us behind on holiday, they never actually do it. And hey, Mrs McCallister, ever heard of a head count? MY mum does one every time we get into the car. Yeah, even now. Because she's a good mum, and doesn't get halfway to Paris before noticing I'm not with her. America to Paris is an eight hour flight, lady. You're telling me it took you that long to realise your son, the light of your life, the guy that slaps his face in that iconic fashion, wasn't on your flight? Imma say it. You a bad mum. Kevin, you need to be adopted, because your whole family just could not give two sh*ts about you.

And there we are, blaming​ Harry and Marv. You don't know them. You don't know their struggle. What if they were just two brothers, whose mother abandoned them on a flight to Paris at Christmas when they were young? And now look at the treacherous path they have had to tread. They don't know love. And yet they're the bad guys? Let's face it, it's highly likely that Kevin caused more monetary damage to the house than if he'd just left the wet bandits to their business. Or better yet, he could have just poked all his mum's jewellery out of the letter box and saved the 'bad guys' (although let's just call them what they are: damaged) all that time, trouble and pain. I mean, it's not like his parents deserve any of their jewellery, although it does seem to be the only thing that's important to them. That, and punctuality - so desperate to be on time for their plane that they THEY LEFT THEIR CHILD BEHIND.

​The Grinch's bad memories stem from a traumatic childhood which involves him cutting himself shaving and getting embarrassed in front of a girl he liked. So it's highly unlikely that he wants to come back down to Whoville and experience that all over again as an adult, but he does, because of Cindy Lou, and pretty much experiences the same thing all over again. So is it any surprise that he lashes out? Ok yes, setting fire to the town Christmas tree was a bit excessive, but you just have no idea how strong those flamethrowers are these days. The story of the Grinch ends well, but it's all the heartache in the middle that I find hard to watch. You are no Dr Phil, Cindy Lou. Leave it to the professionals next time.

Ebenezer Scrooge is an old character, but we particularly love the fuddy-duddy grumpiness of Michael Cane's version in the Muppet Christmas Carol. But we hear ya Ebenezer: sleep is underrated, especially when your night is constantly interrupted my ghosts made entirely of coloured felt. Ebenezer's not a bad guy. He's just a businessman. He does what he has to do to keep his business ticking over.

For anyone who's been stuck outside in their pyjamas when it's snowing, you already know it's not fun. People may be singing and touching your shoulder in a kind way and dancing in top hats but that doesn't stop you worrying that your junk is going to drop off from frostbite at any second. So at least Scrooge takes it all in and changes his ways, because if it were me, the cold meant I would have checked out mentally a long time ago.

Yeah, he's a changed man in the end, but who can really blame him for becoming addicted to his job? Television is a dog-eat-dog world, man. You have to deal with douchebag upon douchebag, and it's only a certain amount of time before that rubs off on you. And surely the real villain is Brice, right? No qualms in stealing the job of his fellow man? So it's no wonder Frank is trying so desperately to make this show a masterpiece.

If Frank​ wasn't there to keep an eye on the production of the extravagant Christmas Carol that's due to be broadcast on TV, it would end up looking pretty shocking. It would be like going to a kid's production of the Christmas Carol, where one kid's forgotten his lines, one is crying, and another is just waving to his mum. Sure, he's kinda mean, but someone needs to keep this machine well-oiled people. And c'mon, his dad gave him veal as a present when he was a four year old. VEAL. It's the meanest of all the meats! So lets all cut Frank a bit of slack, eh? He works hard, and now he's learnt a valuable lesson.

Are there any other Christmas villains you think just aren't given enough credit? Let us know: @sofeminineUK

Why Love Actually Isn't Actually A Happy Film At All

​​​​10 Games You Absolutely Should Not Play At Christmas