7 Best Moments From Game of Thrones Season 4 Episode 8: The Mountain and the Viper

by Emmy Griffiths Published on 2 June 2014 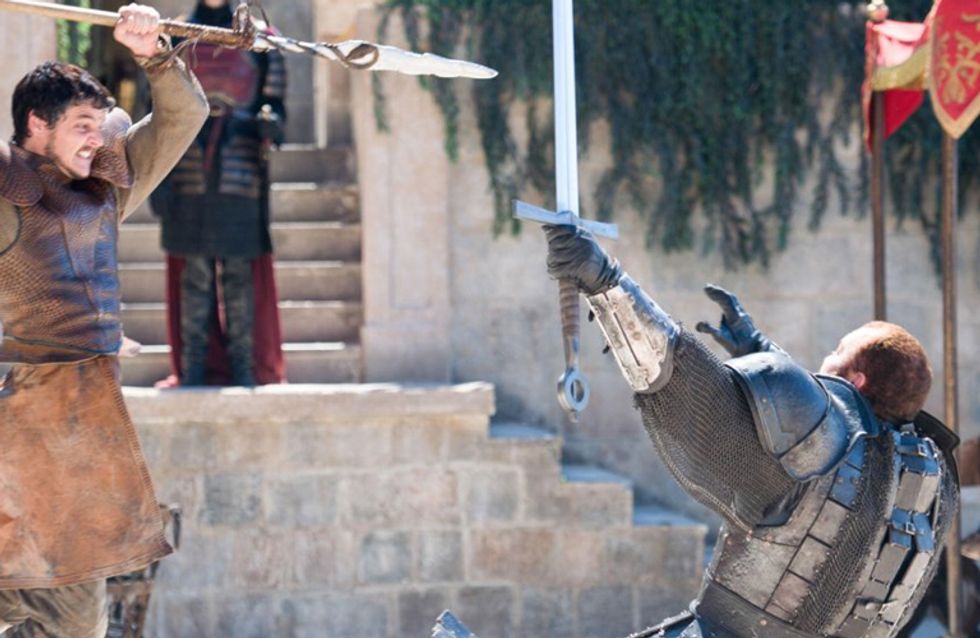 Right. Well. That happened. We all knew that Game of Thrones was a show of bitter, unrelenting unfairness, but this episode took it's reputation to a whole new level of merciless, AM I RIGHT? Though really we shouldn't be surprised. As they say, if you think this has a happy ending, you haven’t been paying attention, as the show delights in reminding us. So let’s recap what happened in The Mountain and the Viper!

Yay! We missed her! She was only slaughtering the people that found that disgusting burping woman funny, so by all means stab away girl!

We also love that she left Gilly and baby Sam out of it, big ole’ Wilding softie that she is.

The Black Brothers and how nice they’re being to poor sad Samwell when reasoning that Gilly might not be dead was actually really touching, in their own way.

They’re basically the Westeros equivalent of the type of lads who go on holiday to Magaluf.

Kicked out of the Friendzone

Just when you thought you couldn’t feel any sorrier for poor, lovesick Jorah, this episode reveals his past discrepancies and he is banished forever from Daenerys for something he did WAY back in season one. Come on! Nothing matters anymore from season one, just ask Lysa Arryn and Littlefinger!

Well, Jorah finally got out of the friendzone. #GameOfThrones

Sansa Stark has always been a survivor. In King’s Landing she did it by acting like a stupid little girl in love with the King, but things change.

Littlefinger wants her. Littlefinger is the only one who can help her. So what's her move? Dress as a sexy Mockingbird to appeal to the pervy older man, obviously! We love that Sansa's started to play the game properly. It's about time!

If you don't think Sansa Stark is one of the best players of the game of thrones, you are so beyond wrong.

A Series of Unfortunate Events for The Hound and Arya

The Hound has been carting Arya around for weeks now in the hopes of getting a ransom whilst being very vocal about how she’s not even worth the effort anymore.

So when they arrive at Arya’s Auntie Lysa’s house and are informed of her death, this reaction was PERFECT.

Was it at The Hound's expense, or just at the irony that her entire family is dropping like flies? Either way we loved it.

Arya "everyone i know is dead so whatever" Stark

When Arya gets within 15 miles of a family member they have a 40% chance of dying within 2 days.

THIS. THIS is why Game of Thrones is literally the WORST. Ramsay Snow hunts humans for sports, flays people alive, chops off poor Theon’s penis then eats a sausage in front of him, and he still gets THE thing he wants more than anything and is made a legitimate Bolton. What’s more, was that WINTERFELL they were headed to? Oh for heavens SAKE.

We hate you Ramsay. We hope winter comes and stabs you in the face.

Ramsay Snow, the only person in Westeros that could make you miss Joffrey. #DemThrones

"You are now Ramsay Bolton from this day until the end of your days" pic.twitter.com/JK8KNB3Kd8

The Mountain vs the Viper

Guys, open up YouTube. Type in ‘dog teaches puppy to go downstairs’, and together let’s try to move on from the trauma we have collectively undergone.

The most painful thing is that he could have won. HE COULD HAVE WON. That was BRUTAL. Oh, and doesn’t it mean that Tyrion is as good as dead now as well? Fabulous.

What more is there to say but to share in our grief with Twitter and try to move past this.

Wow. That was straight up gruesome... Love that last shot. My thoughts exactly. #TheMountainandTheViper pic.twitter.com/sKx4lqzWb5

EVERY time you think you are expecting something good to happen, the EXACT opposite shit takes place... #GoT #TheMountainAndTheViper

1. First season it was Ned. Second second it was the Battle of Blackwater Bay. Third season it was the Red Wedding. Is the infamous episode 9 next week going to be Tyrion's time to go? We hope not but you never know with this GD show.

2. Is Ser Jorah going to resurface in King's Landing next week?

3. What's The Hound going to do with Arya next?

4. What's the worst GoT's death so far? The head-quash must be up there, right?
​
5. The most important question: how excited are you for the next episode?! Check out the promo below!