Abbey Clancey was announced as the winner of Strictly Come Dancing last night, defying the odds after being the third favourite to win the show. There can only be one person to hoist up the glitterball trophy, and the other contestants - Natalie Gumede and Susanna Reid – were the runners up after missing out on the top spot, with Sophie Ellis-Bextor finishing in fourth place, though it sounds like the girls had an amazing time win or lose!

The model’s victory came as a great surprise as she had been the third favourite to win the show, and according to her reaction, not to mention her Twitter page, it sounds like she was utterly shocked as she took home the glitterball trophy along with her dance partner Aljaz Skorjanec for the 11th series of the immensely popular dance show. 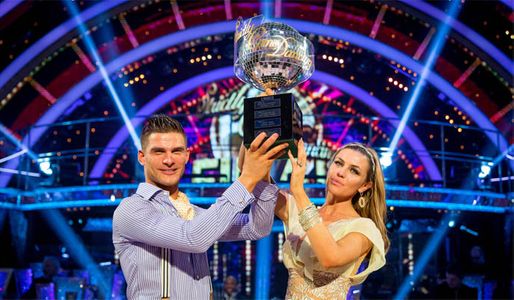 The WAG said that she felt like she: “had an angel looking down on me”, as her hubby, the England footballer Peter Crouch, cheered proudly from the audience.

Apparently an incredible six million people voted on Saturday night, and Abbey was in tears after the announcement.

She said: “I just can’t believe it. It’s mad. My little girl will just love this. I’m so shocked.”

She also name dropped her lovely supportive husband in the audience, saying: “It was awesome having Peter in the audience. He played today and he scored and so did my brother and to have them here was just incredible. I had an angel looking down on me today.”

Aljaz was just as excited as Abbey for their win, and said: “I can't believe it. What a journey, I can only thank you [Abbey], you've been incredible.”

Abbey also delightedly celebrated on Twitter, and wrote: “Wow just wow thank u everyone u have made my dream come true I can’t believe it x.

“Serious how has this happened still in shock and just seriously can’t believed u loved watching me as much as I love dancing!!!!!

“Just cannot believe this woo hoo. Can somebody please tell me how this has happened x”

Aw, she’s so excited! However, although the WAG won the series, she did not top the SCD leader board.

Natalie Gumede, who was the second favourite to win the show, finished at the top of the leader board, but was still pleased to have come runner up. She said: 'It's been so emotional and incredible and the best experience of my life.”

The series favourite to win, Susanna, agreed, and said: “I'm going to miss it so much, the greatest prize for me was dancing with Kevin. I felt like a winner everyday.”

The show ended with the contestants joining Abbey on cloud nine as they all danced the Abba’s Dancing Queen.

Once again a great end to a great series! Were you happy that Abbey won? Tweet us @sofeminineUK