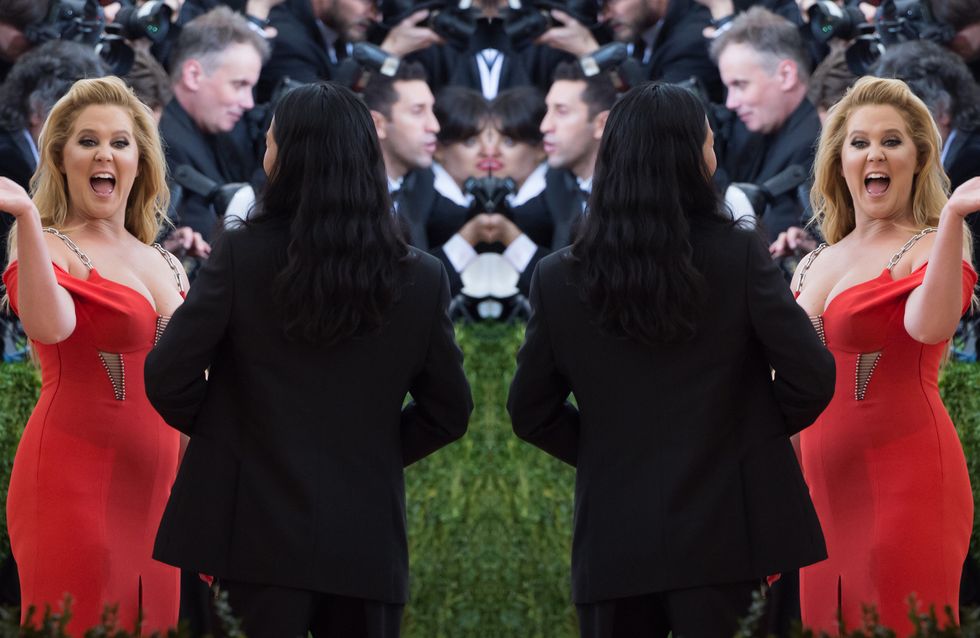 There's nothing better than the feeling of relief when you discover that someone who constantly looks hot does the same weird things as you to prep for a night out. Cue Amy Schumer, queen of our hearts, guru to our lives. Getting ready for the Met Gala, she had a very interesting method to stop party chafage.

Ah, the annual Met Gala - the high profile event held at the Metropolitan Museum of Art which brings Hollywood's most beautiful together and gives them a weird theme, or which they go above and beyond to achieve. Getting ready for the event is an all-day project: one does not simply get ready for the Met Gala, you see. Those few seconds on the infamous steps, where a hundred cameras are flashing in your face, is a culmination of all-day effort and a dream team of hairdressers, designers and makeup artists.

This years' theme was "Manus x Machina: Fashion in an Age of Technology". It's basically like when someone puts the theme on their birthday invite as 'futuristic' and you have to go out and buy five rolls of tin foil - or, in Gigi Hadid's case, a $2000 manicure. We saw glow in the dark gowns, latex dresses, trains made entirely of plumage and, er, Madonna's bum - none of which are very futuristic.

It's only when you scroll through the Instagram of those getting ready that you can truly appreciate how long it takes to get ready for one of these things. This ain't your friend's birthday party, this is Anna Wintour's Gala, and the last thing you want is the palpable sense that Ms Vogue herself is judging you behind those huge sunglasses.

Adriana Lima worked out. Doutzen Kroes had a whole team of people by her side. Karolina Kurkova had a workshop of stylists working on her dress until the last minute. But our favourite is probably Amy Schumer. The only help she needed was from a stick of deodorant to the thighs. Dressed in a gorgeous red Alexander Wang gown, in a video posted to her Instagram entitled 'No chafe #nothighgapnoproblem', the star hitched up her skirt and slathered her inside leg with the stick, causing instant heart eyes in all of us who have the same problem.

Amy also posted a photo of her enjoying a pre-Met Gala snack which, to be honest, has encouraged us to start living our lives by constantly asking ourselves the question "What Would Amy Do?" (W.W.A.D? for short) before we do anything. We suggest you do the same.

What do you think of Amy's Met prep? Let us know! @sofeminineUK

Beyonce's Becky Dress & Kanye's Crazy Eyes: 8 Things That Got Everyone Talking At The Met Gala 2016

​​​​WATCH: The New 'Me Before You' Trailer Is Here And You're Going To Need A Whole Bunch Of Tissues