Angelina Jolie and Brat Pitt Wedding: Daughter Zahara to be maid of honour

We've been waiting for Brad Pitt and Angelina Jolie to tie the knot for even longer than Jennifer Aniston and Justin Theroux - and that's a long time. But apparently the couple are now (at last!) in the final stages of planning their big day. One detail - little Zahara is set to be maid of honour for her mum.

Brad Pitt and Angelina Jolie's daughter Zahara is to be maid of honour at their wedding.

Arrangements for the star-studded nuptials are reportedly in their final stages - 16 months after the couple got engaged.

The couple are apparently set to wed in a few weeks in LA with their little ones all getting a key role in the ceremony.

Zahara has been forthcoming with her wish to play a big part in her parents’ big day.

The eight-year-old has been rewarded with the job of maid of honour for her mother.

The couple's other children - Maddox, 12, Pax, nine, Shiloh, seven, and five-year-old twins Knox and Vivienne, will also be involved.

A source told US OK! magazine: "Zahara wants to be maid of honour and knowing Angelina she'll let her.

"Shiloh wants to be an usher and Pax and Maddox have said they'll help Brad's brother Doug be best man." 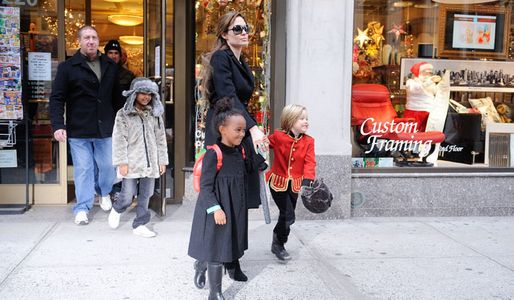 The super couple made the decision to marry after persistent pressure from their kids, so they're letting them be very involved.
​
The insider explained: "The wedding is mainly for their children and they want it to happen at home in LA."

Brad and Ange were thought to have originally planned their big day to take place at their house in France.

Their beautiful, sprawling property - Chateau Miraval estate in Provence - would've been an idyllic venue, but they wanted to make sure it wasn't an inconvenience for guests.

The source added: "Angie has said that a destination wedding would be hard on most people.

"A wedding at their home in LA would make it fun and easy for guests to attend.

"She wants to exchange vows in a registry office with immediate family and the six kids and then host a huge party at their place."

Sounds like fun - we definitely hope there are pictures of the kids in dresses and suits.

Nothing cuter than a flower girl and page boy.