They may already have half a dozen children to fuss over, but the celebs of Hollywood never like to do things by halves, and it sounds like Angelina Jolie and Brad Pitt are looking to adopt little bundle of joy number seven! Perhaps they want babies back in the house now that they’re youngest, twins Knox and Vivienne, are already five!

Apparently Brad Pitt and Angelina Jolie are looking to adopt another little one to join the Jolie-Pitt brood, and are keen to find a little girl in need of a home.

The long-term engaged partners already have six children, three of whom are adopted – Maddox,12, Pax, 10, Zahara, nine and their younger biologicial kids Shiloh, seven, and twins Knox and Vivienne, five. However, why settle on six?! 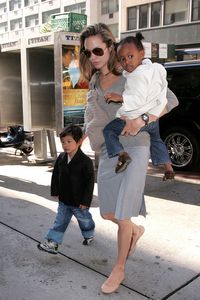 According to Grazia magazine, the couple want even more children, and an insider told the magazine: “Angelina and Brad have spent much of the festive period discussing extending their family. They’ve been open with the children about it and are really excited at the prospect.”

It has been reported that the couple did originally want to adopt from Jordan, but the process became too difficult and so they have now turned to Ethiopia, which is where their eldest daughter is from. According to the source, the couple are keen for another daughter who shares Zahara’s heritage.

“They have always wanted Zahara to have a sibling who shares her African heritage. Ideally they’d like a little girl aged between two and three.” The source alleged.

It sounds like the pair will need some stability before they take on another little one, as before Christmas Angelina had been living in Australia with the kids whilst Brad was in England making a film. However, apparently the couple has been spending time with their friend and adoption expert Dr Jane Aronson, and will be meeting with orphanage bosses in Ethiopia in April.

The source said: “There is likely to be a visit in Ethiopia in the next few months to check on proceedings at the clinic [that they are building in Zahara’s name].

“But they will visit orphanages at the same time. They hope to have everything in place to go ahead with the adoption around April.”

Do you think Brad and Ange should adopt again? Tweet us @sofeminineUK