BBC One has released the first official photos for ‘The Day of the Doctor’, Doctor Who’s hugely anticipated 50th Anniversary Special that will see the Tenth and Eleventh Doctor together on screen for the first time. Featuring Matt Smith and David Tennant as the Doctors we know and love, and John Hurt as a mysterious anti-version of the Doctor as revealed in the jaw dropping season 7 finale, can everyone join me in an ‘ARGH’!

One of the photos of the three Doctors ominously stood in a row from the inside of the TARDIS shows something metallic stuck in John Hurt’s pocket. An evil sonic screwdriver, perhaps?

It’s fair to suggest that John Hurt’s Doctor may be the villain of this piece from Matt Smith’s reaction to him in the season 7 finale and indeed, another photo released that shows Matt looking rather worried.
​
​Meanwhile, his companion Clara (Jenna Louise Coleman) looks to be in the middle of the action in a photo with Kate Stewart (Jemma Redgrave) who appeared in season 7's The Power of Three.

There’s also a shot of David Tennant manning the old version of the TARDIS (ah, memories) and Matt Smith dangling from the blue box, clinging on with his fingertips.

​The only person inexplicably absent is Rose Tyler (Billie Piper). Where are you at Rose?!

Check out the photos for yourself below and tweet your top 50th Anniversary theories to @SofeminineUK! 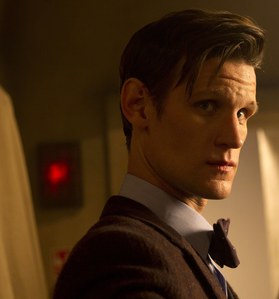