Everybody stop what you’re doing. Put down your graphs measuring the height of the building Sherlock jumped from versus his weight and the velocity of the supposed impact. Stop viewing the death scene in slow motion in the hopes of finding out the precise time Watson was knocked by a cyclist and what this could mean. Because we have a new, bona fide image from the new series, and it needs to be analysed immediately.

Series 3 is just around the corner, and the BBC has released an official image from the show.

The image features an apparently downcast John Watson (Martin Freeman) sat in a diner looking contemplatively at his mug of coffee, whilst Sherlock (Benedict Cumberbatch, we love you) stares at him from outside the window.

As poor Watson looks so miserable, it could be that he is still in mourning for his friend. Therefore this picture could show the moment that the supposedly dead consultant detective reappears to his friend, though it's more likely to be a red herring.

Heaven knows the writers of Sherlock enjoy messing with us!

The final episode of series 2 premiered on 15th January 2012, and series 3 is assumed to return in the UK in early January 2014, a full two YEARS after Sherlock supposedly killed himself by jumping off a building before appearing alive and well again, leading fans to grow increasingly more frustrated to know how on earth he did it. HOW DID HE DOOOO IT?

Other clues we have picked up that can be expected from season three are that the titles of the episodes are The Empty Hearse, The Sign of Three, and His Last Vow, and that Lars Mikkelsen will appear as the new villain Charles Augustus Magnussen.

We also know that in one episode Sherlock disguises himself as a homeless person (part of his homeless network perhaps? Hmm.)

We are still awaiting answers from The Reichenback Fall though, and we’d better get them. Soon.

Are you as excited as we are to see the return of Sherlock? Tweet us @SofeminineUK. 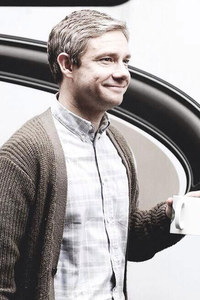 Emmy Griffiths
…
#Sherlock
From hair ideas to outifts, look no further for your daily inspiration