Benedict Cumberbatch is set to star in movie The Fifth Estate and has been talking about just what he'll do if he faces the wrath of Wikileaks fugitive Julian Assange. Turns out the Sherlock star isn't afraid - he's confident he can call on his 'Cumberb**ches" at any point. We reckon he's right.

Benedict Cumberbatch has been considering his options if Julian Assange isn't a fan of his film The Fifth Estate.

Ben is set to star as the protagonist in the movie about the Wikileaks scandal and is preparing himself for the possibility that Julian will not be a fan.

Julian has previously criticised the film as a "propaganda attack".

But the 37-year-old actor joked with Entertainment Weekly that his loyal following would be there to protect him if necessary.

He said: "I'm sure he'll go after me... I'm not a bank with offshore accounts in the Canaries, I don't fiddle my taxes, I'm not wanted for war crimes.

"If he goes after me, it's going to be a waste of his extraordinary talent!"

He added: "But if he does, I kind of respect that because he needs to be able to answer back.

"Anyway, the Cumberb**ches have got my back, so I'll be fine."

​Discussing the role, he explained that his intention is to offer the public a different view of a man that for most is little more than newspaper inches.

He said: "He's an extraordinary figure. The movie was just the opportunity to try and unlock a little about who he is and what motivates him.

"I hope if I've done well, I've probably humanised someone that many people only think of in tabloid headline terms.

"I don't want to upset him. So if I do, it will be distressing. But he knows that."

The Sherlock star has made efforts to explain his intentions to the man he is playing.

Ben added: "I have communicated that to him, let's put it like that.

"It's not like we've had a correspondence, but I've made it known to him that I'm not some kind of devious character assassination where I play him as a villain."

The Fifth Estate is set for release in the UK on 11th October 2013. 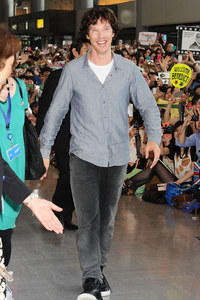 Francesca Menato
…
film
From hair ideas to outifts, look no further for your daily inspiration