All The Best Bits From The Brit Awards 2016

by Pascale Day Published on 25 February 2016 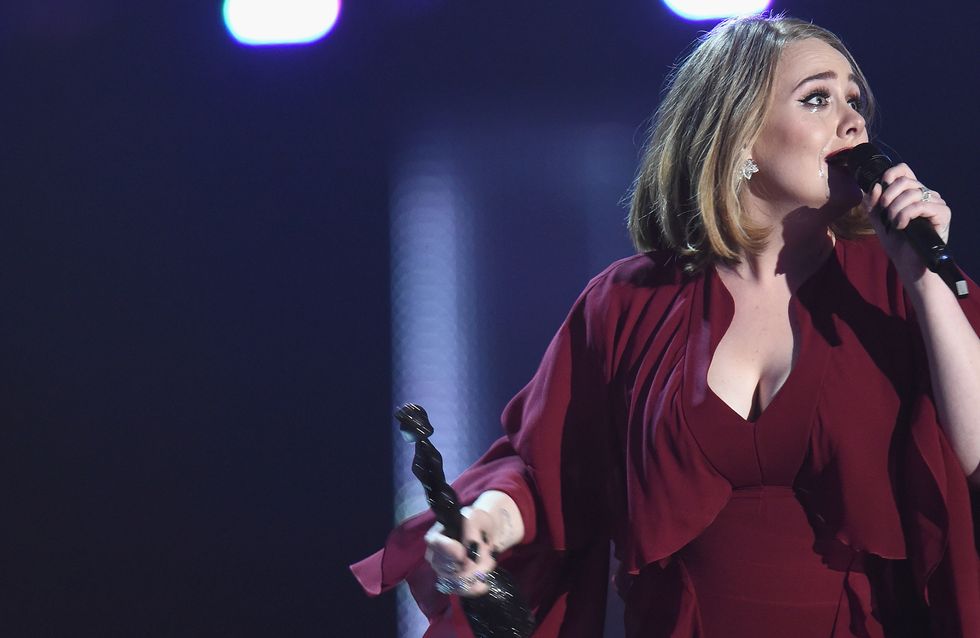 Every awards ceremony has its fair share of controversy. But, after last year's Madonna-cape incident, this year's Brit awards was always going to seem a bit tamer. But as with live TV, anything can happen. Turns out, last night was a pretty wonderful celebration of music, awkwardness, David Bowie and, of course, Queen Adele. Here are our favourite bits.

For those who watched the Grammys you'll remember Lady Gaga's gaudy tribute to David Bowie last week. A hasty mash up of Bowie's greatest hits and a theatric costume change that involved dancers ripping off Gaga's outfit to reveal another underneath was only made worse by the fact that the whole performance was pimped out to Intel, with adverts for the company bookending the performance. But us Brits, we're more about keeping it low-key. Let's keep it sensible, chaps.

Bowie's old friend Gary Oldman accepted the posthumous award with a heartfelt speech that caused blubs from sofas around the country, saying "David faced his illness with dignity, grace and his customary humour. Even in dire circumstances." He then introduced Lorde, who David was a fan of prior to his death, who performed a perfect rendition of 'Life on Mars' with Bowie's band. It was a simple and elegant affair, perfectly suited to the occasion.

Adele won all of the awards ever

Adele cleaned out at the Brits last night as we all knew she would, and her response couldn't be more humble. Not only did she come out in support of Kesha, but she openly weeped when she was awarded the Global Success Brit award by none other than astro-celeb Tim Peake. Despite being hella busy with space stuff, Tim suited up (kind of) to gift Adele with her award (virtually, anyway). Adele was overcome with emotion and there were points where, even when her words weren't being incorrectly bleeped out, it was kinda hard to hear here through all the tears. Plus, she voiced her support for Kesha. But I think speaks for all of us when she said "Time Peake I love you, I hope you're ok and not too hungry. Bye!" A perfect example of why we love her so.

So, Rihanna's returned and gah she doesn't hold back, does she? After being somewhat elusive at awards ceremonies since the release of Work, everyone wondered if she would pull out of her performance like she did with the Grammys. But she was all in. Drake joined her onstage, and it was no tame affair: there was a LOT of grinding. It was horribly intimate, as we watched the two former lovers rutting their privates together like a drunk couple at a wedding before they go and have sex in the photo booth. The song itself? Meh. The performance? Don't watch it with your mum, that's all we gotta say.

After asking in a panic "Where do I look?" when on the podium to collect his award for British Male Solo Artist, James Bay must have been in a bit of a tiz, seeing as he thanked "my brother Lucy". Huh?! Turns out, his brother is Alex, and his girlfriend is Lucy. This is a classic case of the need for punctuation at its best.

The awkward moment with One Direction

It seems like One Direction have well and truly gone in separate directions since taking their break after only Liam and Louis turned up to the Brits last night. We have a suspicion that they Rock, Paper, Scissored it to see who had to show up, with Liam and Louis losing. Either that, or Harry and Niall are hiding in Jess Glynne's hair. Hey, Tim Peake gave an award to Adele from space guys - anything's possible now.

1D won the award for Best British Video of the Year - an award voted for by the public. Their acceptance speech was droll in comparison to Adele's impassioned words, and there was a moment when Liam turned to Louis and said "How's your break going?" It was a joke obvs, but... was it? We don't think so. Totes awks.

Tame Impala and Bjork were winners

In a world that tends to celebrate only a minority of music, awards season usually churns out the same winners each year. So it was nice to see Australian band Tame Impala take home the statue for Best International Band and Bjork take home Best International Female. Two artists that don't normally get the recognition they deserve.

Justin performed Sorry and Love Yourself with last year's Brit Breakthrough winner James Bay. It was a good performance, we love this new, sensitive Justin, but we particularly loved the sweet little interaction between the two of them, caught by Fearne Cotton on Instagram: "This is @jamesbaymusic and Bieber just before performing. We were sat right in front of them and when Ant and Dec played in the sfx of the smoke alarm going off Justin turned to James and said "is that the fire alarm going off?" Bless!"

This is @jamesbaymusic and Bieber just before performing. We were sat right in front of them and when Ant and Dec played in the sfx of the smoke alarm going off Justin turned to James and said "is that the fire alarm going off?" Bless!

What did you think of last nights Brit awards? Let us know! @sofeminineUK

All The Best And Worst Looks From The BAFTA Awards 2016