Beyoncé Knowles is not a popular woman this morning. The star headlined V Festival at the weekend but some fans in the crowd were left disappointed with what they saw. And even more unhappy were viewers at home, who weren't able to see any of the star's set.

The singer's 17-track set got off to a bad start when she left the crowd waiting in the rain as she was 20 minutes late.

One member of the audience tweeted: "Boo-yonce! Crowds ain't happy she is late."

And the problems didn't stop there - when her performance was blighted by a technical hitch, many festival-goers decided to abandon the show early.

A spectator told Metro: "The sound was terrible…people just walked away halfway through her set."

And fans of the crazy In Love singer watching festival footage on their televisions at home were even less impressed.

Bey's gig was pulled from Channel 4 at the last minute, with hosts Edith Bowman and Steve Jones suggesting it was the US star's decision.

Fans made their anger known on Twitter after it was reported that Beyoncé had refused to clear her performance for broadcast.

Some even got personal, hitting out at the 31-year-old mum-of-one's new blonde bob!

One user tweeted: "Dear Beyoncé, thanks for not letting channel 4 show you at V. You were prob s*** anyway. As for that barnet, don't get me started. #bigtime."

Another added: "Not happy with @Beyonce not allowing @channel4 to air her performance! Shows she doesn't really care about her fans #letdown!!! X."

And a third wrote: "Absolutely gutted that @Beyonce wont let channel 4 show her highlights! Been looking forward to it all week! #angry."

Absolutely gutted that @Beyonce wont let channel 4 show her highlights! Been looking forward to it all week! #angry

Prior to her performance, the star had been staying on site with hubby Jay Z in a Winnebago.

This isn't the first time Bey's been shy for the public to see her unedited.

During her tour in April, she'd ranted at fans for filming her on stage and had even banned photographers in an attempt to prevent unflattering photos surfacing.

Instead Bey hired her own snapper so she could pre-approve all pictures.

Channel 4 is now working to ensure fans who couldn't make the gig will be able to see her performance on TV.

A spokesman said: "We're in discussions with Beyoncé and hope to include highlights in our coverage." 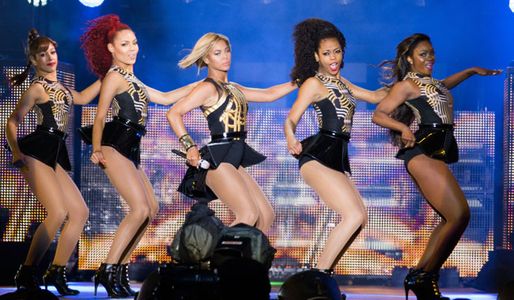