Beyoncé, fabulous diva beloved by all that she is, recently gave a delighted girl a surprise by leaning into a picture that the fan was taking of herself at Beyoncé’s concert. Having made it to the front of the stage, the fan celebrated with a selfie which Beyonce popped into as she sang, leaving the fan with a truly awesome and one-of-a-kind picture, which she promptly posted to Tumblr.

Beyoncé made a fan’s night by ducking into the girl’s selfie snap.

The 15-year-old fan was at Beyoncé’s concert and had made it to the front of the stage.

In a celebratory act, she turned her back from the stage to snap the moment, which is when the Queen B saw a golden opportunity to photobomb.

The ecstatic fan (who wouldn’t be ecstatic if you owned a photograph of yourself with possibly the best person EVER?) chatted away about the moment on her Tumblr page, writing: “OMG OMG OMG I can’t believe it happened to me!

“It was such a blur, I just remember her bending down to me and my friend and I just turned for the photo and wowoowow it was the best moment ever!”

Beyoncé is grinning cheekily in the picture, and the fan commented on the moment, stating:

“Like she posed, it’s crazy I wasn’t even expecting her to look at my phone or notice me in the crowd.”

After finishing up arena tours in New Zealand and Australia, the hardworking 32-year-old will head off the North America next, taking her young daughter Blue Ivy with her for the world tour.

Also according to producer Pharrell Williams, as well as being right in the middle of touring, the mum-of-one's fifth studio album is about finished.

He told Billboard: “She’s not going to put it out until it’s ready and feels like it’s right to her.”

Who would you want to photobomb you? Tweet us @SofeminineUK 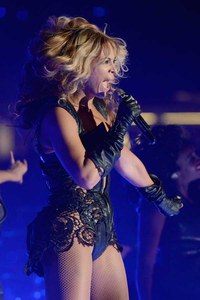