Brad Pitt and Angelina Jolie are reportedly beginning to have some major couple issues. The two of them are currently on the other side of the world to each other, with Brad filming Fury in Oxfordshire, and Angelina directing her second film Unbroken in Australia. Reports have said that Angelina is beginning to feel the strain of single-handedly taking care of the Jolie-Pitt six kids that are residing with her and has dramatically lost weight with the strain.

Angelina Jolie and Brad Pitt’s relationship may be in trouble as living on the other side of the world to each other begins to take its toll.

Ange once told People magazine about how her working relationship worked with long-time partner Brad, stating: “I have a wonderful partner in Brad and we take turns working always.

“So I was with the kids when he shot Moneyball, and when he finished he took a few months off whilst I was shooting this [In the Land of Blood and Honey].”

Unsurprisingly, the change was then noted when the two of them began to work on separate films at the same time earlier this year.

Although they initially took it in turns to look after the kids (deep breath) Maddox, Pax, Zahara, Shiloh, Knox and Vivienne, the family are now apparently in Oz with Ange.

This is the longest the couple have been apart since 2004, with an insider telling Grazia: “They’re living separate lives at the moment. The distance is really causing major problems.

"This is the first time their work schedules have clashed like this and goes against everything they’ve always agreed on, but Angelina wanted to get on with directing her second film.

"They’ve broken their pact and the cracks are starting to show. Even though the kids all have nannies, both Brad and Ange are very hands-on parents, and she must feel like a single mum at the moment. It’s very tough and stressful for both of them.”

Apparently the stress has taken its toll on Angelina’s figure as well, as alarming reports of her weight plummeting have emerged.

A source said: “She really does seem to be at one of her lowest weights ever. Apparently she’s around the 7st mark at the moment. The thing is she’s working round-the clock and racing round after the kids at home. She just grazes and doesn’t seem to have time to sit down for a big meal.”

This, of course, has all happened only nine months after the Oscar winning actress underwent a double mastectomy to reduce her 87% risk of developing breast cancer.

She took this act with great courage, stating: “The decision to have a mastectomy was not easy. But it is one that I am happy that I made. My chances of developing breast cancer have dropped from 87 per cent to under five per cent. I can tell my children that they don’t need to fear they will lose me to breast cancer.”

Brad is reportedly concerned about her state of health as well and is allegedly desperate to finish filming so he can join her and their brood again.

Sources say he is trying to find a loophole to get to Australia sooner, revealing to Grazia: “Brad was supposed to be filming until December, but he’s desperately trying to figure out how to get to see Ange and the kids.”

Sounds like they need to spend some family time together and Ange needs to eat a hearty roast dinner! 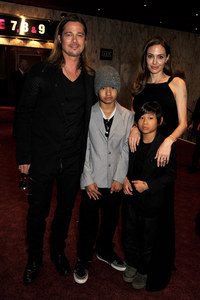