It looks like the apple really doesn't fall far from the tree, as the eldest of the Beckham clam, Brooklyn, could be following in dad David’s footsteps. Brooklyn was spotted at the Manchester United football club’s training ground with daddy Becks, who has admitted that whilst not wishing to put any pressure on his children, he does hope that Brooklyn could be good enough to play professionally one day. And with a trial at Man U, it looks like the 14-year-old really could!

Brooklyn Beckham is hot on the heels of his dad David's career after attending football trials for Manchester United football club yesterday.

The 14-year-old had trials at Chelsea in January and has been training at QPR, clearly demonstrating his interest in following his father's footsteps by taking up football as a profession.

He even played with Dennis Wise’s son Henry for their Under-14s against Charlton Athletics in September. Is this the next generation of great footballers perhaps?

A source revealed to the Daily Mail: “He was there with his dad and took part in a practice session with one of the academy sides. It was a chance for him to impress.

“If he’s done well then no doubt the club will look at taking him on.”

Although the eldest of David and Victoria’s brood trained there yesterday, it's unlikely there will be a permanent association with the club just yet, as it was reported that Man United just wanted to take a closer look at him as he tested out his skills.

Originally David's career essentially launched at the club, where he played for nine years until he transferred to Real Madrid in 2003.

If Brooklyn is anything like his dad, clearly the Premier League club are being wise about checking out if he's inherited his father's footballing abilities (including his famous 'Bend It Like Beckham' free kick technique).

It looks like it will be only a matter of time until the young lad is associated with a club, as according to proud dad David, Brooklyn is a natural talent and was doing keepie-uppies aged just seven.

David has also recently revealed that he is finalising plans to start a Major League Soccer franchise in Florida, which apparently he hopes Brooklyn will one day be a part of. When asked if he would like to see Brooklyn on his team he said: “yes, hopefully.”

David’s second eldest Romeo, aged 12, also shows a keen interest in football and has trained with Arsenal’s academy - in between modelling for the likes of Burberry.

All of the Beckham boys are regularly seen at David’s training, and it can’t be denied that football has been an essential part of their childhood, with toddler Brooklyn going onto the pitch with his dad aged just two.

But it's not just the boys who love the game, most recently baby Harper was spotted celebrating scoring a goal when on a family day out.​

Isn’t this the best family ever? Tweet us @SofeminineUK 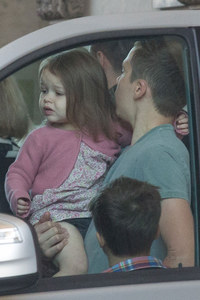