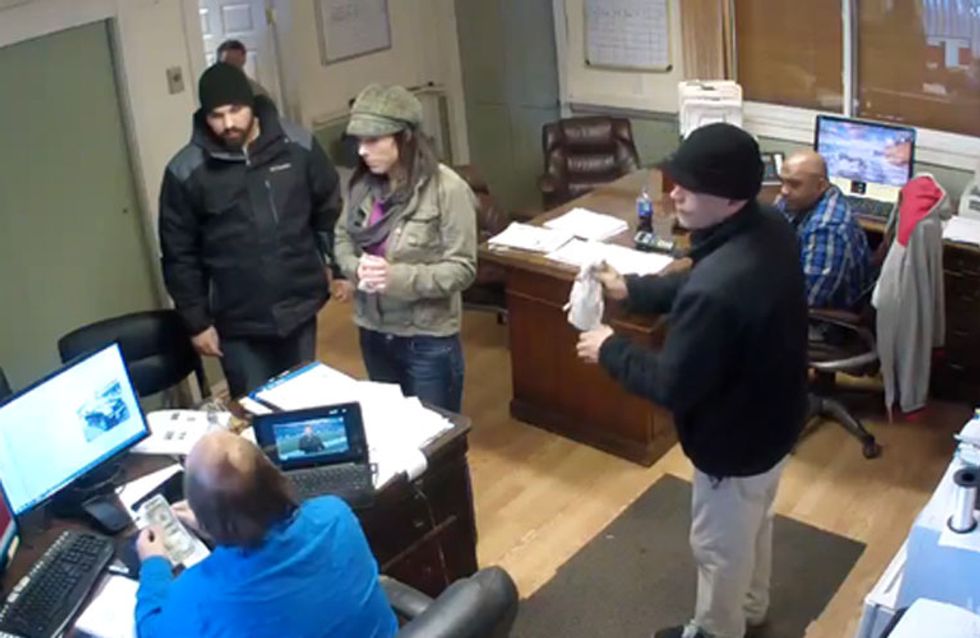 The Internet can be a mean place, but on occasion something like this happens and totally restores your faith in its power to do good in the world. If we’ve learned anything from this story, it’s that there are some brilliant people on the web. Oh, we also learned not to be a complete d*ck then post the video online. Duh.

The video of a car dealership messing with a pizza delivery guy has led to widespread Internet fury and a personal apology, and we’ve got to say it’s the most satisfying thing we’ve seen all day!

The video shows the delivery man (later learned to be Palace Pizza employee Jarrid Tansey) arrive at the office in order to return $7 which he had assumed they had given him as a tip after having given him two twenty and two five dollar bills for the $42 bill.

Despite clearly being annoyed, Tansey calmly said: “Here’s your change. It just doesn’t make sense why you’d hand me a bill that you were just gonna have me drive back here to give you back anyway. I’m not mad, I just had to waste my resources coming back here.”

The office workers immediately jumped to the defence of their change (roughly about £4, just FYI), claiming that they should have been given it back immediately, then saying: “Alright listen. The manager apologised once for you. Do you want him to have to apologise again for you?”

Tansey tried to defend himself, saying: “So you handed me a five dollar bill that I would have to bring back…no one asked me for change. It’s not like I just took off. I even explained the process and wrote it on the slip.”

Finally getting sick of the office workers Jarrod left, saying: “It’s alright, you got your $7 so the world is right now.”

One of the workers called: “I got you on camera, video, audio, everything buddy.!”

The moment he left, the office worker’s showed their truly unpleasant colours.

A female office worker says: “Out the door before I put my foot in your ass,” as everyone laughs. Another man says: “get the f***ing owner and the manager on the phone, I want that mother***er done. I want him fired.”

The video was originally posted (then made private) on YouTube with the title ‘irate pizza driver’. Commenters who saw the video before it was made private claimed the channel belongs to F&R Auto Sales in Westport, USA. Talk about bringing it on yourselves!

Since Live Leak picked up the video, the Internet has reacted in it’s own, hilarious ways. This is why we occasionally love people.

The dealership’s Facebook page (which has now apparently been deleted, along with the company's website), received copious amount of comments, none of which were nice.

Yelp users have had a similar idea, giving the business horrible (but admittedly funny) reviews.

The manager of F&R Auto Sales told Buzzfeed: “We’ve been harassed all day. The police are investigating this.”

When asked about the incident, he said it was: “just a stupid thing with a guy who doesn’t even work here.”

How could you treat a Pizza guy like that? Congrats on ruining your business for a 12 dollar pizza!!! (@ F&R Auto Sa… http://t.co/1oKBqmt20Y

In which the fine folks at F & R auto sales learn that that the internet can be used for more than buying cars.

hey F&R Auto Sales, hope that $7 was worth all this embarrassing international news coverage and backlash. absolute clowns. #flogs

I don't feel bad for F&R Auto Sales. Treat people with decency...like what the hell was that? #TeamPalacePizza

Palace Pizza has now been getting calls of support, with people even making donations to the berated pizza delivery guy and his family. The manager of the pizza joint said: “I was the manager on that night, and today they came and spoke to me, profusely apologised. We both want to make things right between us. We don’t want any bad blood.”

You reap what you sow, or a witch hunt gone too far? Tweet us @sofeminineUK!