CBB: Dappy’s mum is embarrassed by his behaviour

Dappy has been making quite a spectacle of himself in the Celebrity Big Brother House - mostly to our amusement, and sometimes to our disgust. The latter definitely won out the other night when the N-Dubz star got a little too into a game of Truth or Dare with Luisa Zissman. We can’t comprehend how he doesn’t mind doing these things on television, and apparently his mum completely agrees with us!

Dappy’s mum has come out to say that she’s embarrassment by her son’s Celebrity Big Brother House antics.

She was most likely referring to the truth or dare game played by Jasmine Waltz, Lee Ryan, Luisa Zissman and Dappy himself the other night, when Dappy was dared to: “stick your head up Luisa’s top and suck her knickers.” 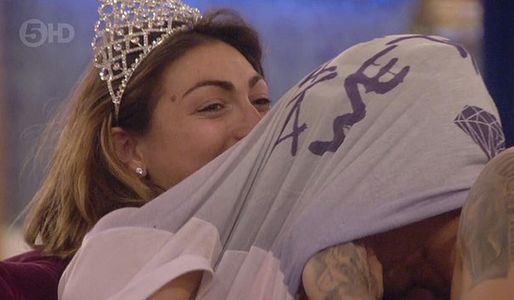 Dappy is never one to turn down a dare, and stuck his head into Luisa’s top as she giggled. Seriously it was horrendous to watch, so just imagine if you were his mother!

Talking to The Mirror, Zoi Constostavlos said: “There were a couple of bits I have found embarrassing to watch. It was not the best side of him but they have to show every side.”

It does sound like there’s nothing that Dappy won’t do onscreen, so we reckon Zoi should probably stop watching soon! His fellow N-Dubz bandmate Fazer, who has known Dappy since childhood, claims that the 26-year-old would have no problem having sex on telly. In an interview with Now magazine, Fazer said: “If I know my guy then maybe they slept together. He doesn’t really care about that sort of stuff…him having sex on camera is not a big deal.”

It does sound like Dappy's mum is enjoying some of the show though, as when asked about Dappy’s earlier passionate argument with Luisa where he calls her a “two-faced sl*g”, Zoi said: “I loved how emotional he became. He’s a very good actor and puts on a front. But when you see him cry, that’s the real man.”

Yeah, calling girls “sl*gs” on television. She must be so proud!

Although Dappy’s ex Kaye Vassell claims that the N-Dubz star hasn’t seen his two children Dino, four and Milo, three, in months, according to his mother he is only doing the show to provide for them.

She said: “He went on the show to provide for his children. He loves them more than anything. He’s a sweet-hearted person, no matter what anyone says.”