We all have that one celebrity that we'd like to marry. No big deal, we just wanna shack up with them and have babies. It's fine. And whilst it may seem like a far-off dream that has no chance of being fulfilled, don't give up hope just yet. These famous celebs have bagged themselves a normal person, just like you or I - there is a god! Check out these famous people with their not-so-famous other halves. 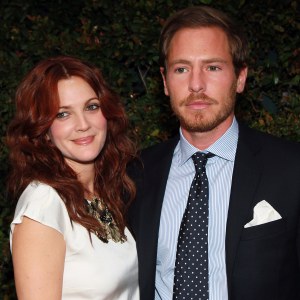 Anne Hathaway had not long split up from her boyfriend of four years, real estate broker Raffaello Folliari, when she met jewellery designer Adam Shulman through their mutual friends in 2008. But recent heartbreak wasn't enough to keep the couple apart. Hathaway was pretty taken with Shulman upon first meeting him, and told Harper's Bazaar: "I think he thought I was a little nuts, which I am a bit, but I’m also nice. [...] I’ve never really talked about this, but I was just very honest with him. I knew from the second I met him that he was the love of my life." And thus, they became a couple. In 2012, they tied the knot and in March 2016 she gave birth to their son, giving him the refreshingly normal name of Jonathan Rosebanks Shulman.

Is it just us or is Alec Baldwin the best looking of the Baldwin bunch? That's probably why he's managed to bag himself such a beautiful lady in the form of yoga instructor Hilaria Thomas. The pair met in a restaurant, with Hilaria admitting that, whilst she knew who Alec was, she didn't realise he was quite so famous. The pair got married June 2012, and have two kids with another on the way.

Drew Barrymore and Will Kopelman

Drew Barrymore has had her fair share of high profile celebrity relationships during her long tenure as celebrated actress, including with dreamy Strokes drummer Fabrizio Moretti and a much weirder marriage to comedian Tom Green. Drew's love affair with art consultant Will - who is son of former Chanel CEO Arie Kopelman - began in 2011, and they have a daughter, Olive, together. Alas, the relationship was not to last and Drew filed for divorce in July 2016.

Probably most famous for her role as the cynical redhead Miranda Hobbs on Sex and the City, natural blonde Cynthia has an interesting tale to tell when it comes to her wife Christine Marinoni. Cynthia was in a relationship with schoolteacher Danny Mozes from 1988 to 2003, and they have two kids together. In 2004, however, she began dating Christine, an education activist whom she met at a rally. The two got married in 2009, and Christine gave birth to a son in 2011.

Reese's relationship with Cruel Intentions co-star Ryan Phillippe may have spawned two of the best looking kids in Hollywood, but their relationship was not to last. After a brief frisson with Jake Gyllenhaal, Reese hooked up with talent agent Jim Toth in 2010, and they married the very next year in March. Reese gave birth to their son Tennessee Toth in 2012. The monier definitely has a ring to it, dontcha think?

Matt Damon and Luciana Barroso's love story is every fan's dream. He met the beautiful Argentinian whilst filming Stuck On You in 2003. She was a bartender and helped him escape the paparazzi, and that was that: they were in love. They married two years later and are raising four beautiful daughters together. Swoon.

Dark Knight actor Christian Bale married his Siberian wife Sandra "Sibi" Blažić in 2000 after meeting her when she was a personal assistant to Winona Ryder none the less. Christian said that he never planned to marry because the number of divorces in his family had given him unhealthy ideas about marriage, but there's always one woman who can change the mind of even the most stubborn man. Enter Sibi! Christian gushed about his wife at the Critic's Choice Awards in 2011, saying "I get choked up about that stuff… [My wife] had to be married to so many different characters over our marriage. I know that it truly would be impossible to do it without her. She’s such a good, strong woman."

Now, Kate Middleton is in no way a peasant, but I think we can all agree that she has definitely come from more humble beginnings than the Duke of Cambridge. The pair met at St Andrews University and began dating in 2003, but split up briefly in 2007. But love could not keep these two apart, and they soon reconciled. The pair got engaged in Kenya in 2010, where William proposed with his mother's engagement ring, leaving ladies across the world swooning uncontrollably. They married in 2011 and have two adorable kids together.

Aaron Paul famously met his wife Lauren at Coachella festival - and the couple now return there every year, which is just too cute. And if anyone doubted whether Aaron was in love with his wife of three years, just take a quick look at his Instagram - you'd soon change your mind. Aaron regularly posts beautiful declarations of love to his 'little bird', and is constantly surprising her. Lauren is the co-founder of the Be Kind campaign which is "a movement, documentary and school program based upon the powerful belief in KINDness, that brings awareness and healing to the negative and lasting effects of girl-against-girl crime." Aaron gave her a shout out during his Emmy speech in 2012 and managed to crash the website for views. Talk about goals.

The Danish Girl actor met his wife Hannah Bagshawe in a very professional setting, which might have been a little bit awkward if they could feel the stirrings of romance even at that early stage. Bagshawe works in PR and was Mr Redmayne's publicist before they fell in love! The two got married in 2014 and have one daughter together, Iris May Redmayne. N'awww.

Whilst everyone might think that George Clooney is the famous one out of this pairing, it's like Tina Fey and Amy Poehler said at the Golden Globes: "Amal is a human rights lawyer who worked on the Enron case, was an adviser to Kofi Annan regarding Syria, and was selected to a three-person U.N. commission investigating rules of war violations in the Gaza Strip. So tonight, her husband is getting a lifetime achievement award.” Amal's job as a high-powered human rights lawyer has made her a celeb in her own right. What a babe. The pair met at a charity fundraiser in 2013 and married in Italy in 2014.

Whilst Tasha McCauley might be married to mega celeb Joseph Gordon-Levitt, her job might actually be more impressive than his. McCauley is a robotics scientist and co-founder of company Fellow Robots, which is based at a NASA research facility in San Francisco. They met through mutual friends in 2013, married in 2014, and welcomed a son in August 2015.

Who is your fave celeb/non-celeb pairing? Let us know! @sofeminineUK

​​​Celebrities On Vacation: Warning! This Will Give You Serious Wanderlust