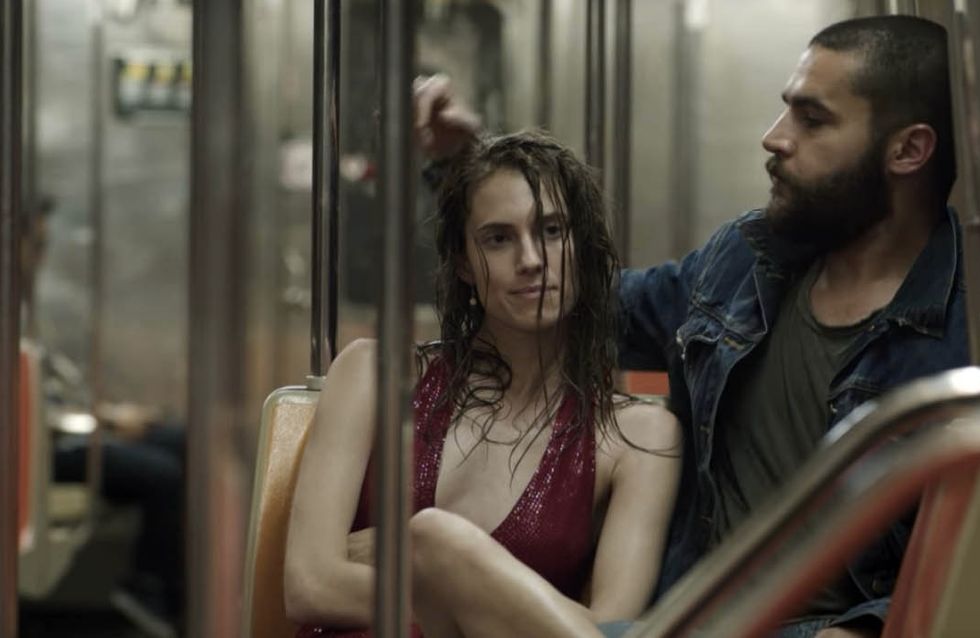 As any hardcore Girls fan will know, when Marnie's super hot boyfriend Charlie left abruptly at the end of season two, it was devastating. Why, Charlie, whyyy? How could you do this to us?! But now, halfway through season five, he's back, but he's not the same Charlie we all knew and loved...

Let's be honest: no one really likes Marnie. Am I right or am I right? Even Allison Williams, who plays Marnie, knows she's the worst. Which is why Sunday's episode of Girls was perfect timing for all the Marnie nay-sayers - we finally get to see why she is the way she is. And who better to share that revelatory experience with than her ex boyfriend?

​That's right, the real reason we're totally excited about the episode, entitled The Panic in Central Park, might have something to do with the fact that all-round babe Christopher Abbott is back to play Charlie for one night only. It's unclear whether Abbott will feature anymore in this series, but it's looking highly unlikely seeing where his character is right now.

The episode opens on Marnie and Desi, sitting in their partially finished bedroom. Desi is strumming his guitar "passive aggressively" at Marnie in a disagreement over scones, and ultimately she leaves him crying alone on the bed as she takes a long walk.

We never find out where Marnie was headed, but her discourse changes as soon as she bumps into Charlie, hanging out with a bunch of guys who insist on cat-calling her. He looks different; he's heavier, and definitely rough around the edges. He talks with an accent that's straight out of Hell's Kitchen. There's no way that what Marnie is about to get herself in for is going to end well, but she takes that risk, because the purpose of this episode is to show a different side to Marnie - one where she doesn't over analyse or judge every situation negatively. The result of this new mindet is a bittersweet journey for the ex-lovers, that ends with Marnie's discovery of Charlie's hardcore drug use.

Many have been describing Marnie's run-in with Charlie as a a 'fever dream', and once you get a sense of where Charlie is at in his life, you do wish it was all just a fantasy created by Marnie as she strolls through New York. He's gone from the young, polite tech mogul to a street-wise coke dealer with a heroin addiction. His newfound swagger isn't down to a shift in personality, but heavy drug use. Yeah, he isn't the pushover that he was, caught between Marnie and Aubrey's nitpicking, but at what cost?

However, Charlie's regression serves a bigger purpose. He sparks the change in Marnie that was needed to push her into the next chapter of her life. If Marnie hadn't bumped into Charlie, what would have happened? She would have walked around NYC, cooling off after her fight with Desi, and then what? Back to their apartment to start again? Marnie and Charlie fall into a regular rhythm; they have known each other, loved each other, before. There were the physical changes - at one point Marnie points out Charlie's weight gain; it shows he's not trying to impress anyone anymore and she likes that - but the extend to which Charlie has changed would not become apparent until later.

Marnie's willingness to accept the night as it comes is a change in her perspective, even if just for a night, so that she can shed the troubles of her life as a married woman or, more specifically, a woman married to Desi. They are tucked into her bag along with her tracksuit. There's a delusion that she could settle back into a life with Charlie, that maybe she can keep up this charade. Sure, she can be positive about the shared shower in his crack-den apartment building. It's cool, right? But upon finding Charlie's needle, it is a hefty drop back to earth. Her relationship with Desi is not the one she should be in right now, she's realised that, but this relationship with Charlie is not the one she's supposed to be in either. Marnie leaves Charlie's apartment swiftly - no argument, no drama. Her growth is already apparent.

The whole episode had been preparing her for the difficult showdown with Desi when she returns home. But, instead of erupting as she had done the day before, she is calm, tired, relieved. She has given up on the marriage and, for once, that's ok.

The last scene sees Marnie climbing into bed with Hannah and Fran at Hannah's apartment. She's walked barefoot all over New York (very un-Marnie like), and now she needs to sleep. The whole episode has been about love: love lost, mostly. Seeing Hannah's reaction as Marnie squeezes in to the small space on the mattress, still in her red dress, just shows the other love she has in her life - the love that is contained in their friendship. It's just a small glance that acknowledges Marnie's presence, but Hannah's essentially saying "It's ok, I know you need this." Boys may come and go, but friendship is forever.

The Panic in Central Park might just be one of the best episodes in the history of Girls. It's evident that Lena Dunham thrives on capsule episodes - season two's episode with Patrick Wilson, or the beach house episode in season 3 were particularly strong points in this continuing narrative. They let us delve deeper into a characters' personality, into the idiosyncrasies that make them the way they are. This capsule episode sets Marnie up on a new trajectory, and we can't wait to watch her find her feet - once she's given them a clean, that is.

What did you think of Sunday's episode of Girls? Let us know! @sofeminineUK

Everything You Need To Know About Endometriosis