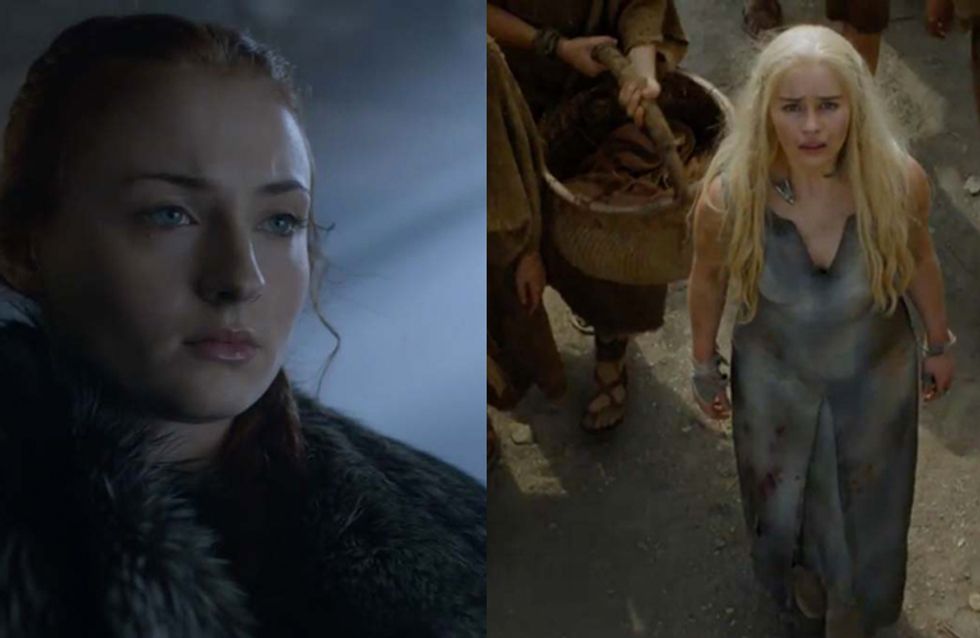 You may as well call us Jon Snow because after watching the Game of Thrones season six trailer we are literally dead right now. With sweet, sweet new footage comes so many burning questions, and we swear on the Old Gods and the New this season had better answer them...

Rule number one regarding dead bodies around Castle Black: burn the bodies. It has been reiterated to us over and over again. The Night's Watch know that White Walkers are real, and that the dead could rise again. So why leave Jon in front of that stupid 'traitor' signpost? Could it be because burning his body would be somewhat counterproductive since they're bringing him back to life?

2. Are the Sparrows in charge now?

King Tommen is a babe and we like his cat Ser Pounce and everything, but he's a wuss. Last season saw the Sparrows take his mother and wife prisoner, and by militarising the religious order it looks like they finally have control above the royal family. Tywin would never have allowed this.

You can show us as many shots as you like of his lifeless body, we still don't believe it.

4. How is Ser Jorah so adorable?

Daario and Ser Jorah are on the trail for Daenerys, and in the trailer Jorah finds the ring she drops and holds it to him. Even though we know he has the greyscale and season six is probably definitely going to be his last, we love that he's still out looking for the Khaleesi like the adorable hunky loving bear cub that he is.

5. What are the Dothraki going to do with Dany?

Our favourite Targaryen is a dishevelled mess in the trailer, travelling to Vaes Dothrak with the Dothraki hoard who surrounded her in the season five finale. So where are they taking her? What are they going to do with her? Hurry Daario and Jorah, hurry!

6. Where did Sansa find lipgloss in Westeros? Also where is she?

Is there a MAC store north of Winterfell no one told us about? After she and Theon escaped Ramsay Bolton in the season five finale, the trailer shows that Sansa lands on her feet, and the levels of fur she's rocking suggests that she is still in the North. Did she make it to Castle Black? Did she go back to the Iron Islands with Theon? Did Brienne find her? So. Many. Questions.

Tinfoil hats at the ready people!

8. Is Cersei back to her bad self?

"I choose violence." Oh seven hells yeah. This is the Cersei we want, not the naked crying sort covered in food as someone rings a shame bell behind her.

In this shot, you clearly see some Stark guys fighting with Targaryens. Since we know the blood of the dragon lot are all but extinct, as are the Starks, we're going to hazard that this scene is a flashback, but to what? The Tower of Joy perhaps? R+L=J PERHAPS?

The only reason Dany has been underground during her time in Meereen is to lock her dragons into the Catacombs, so what is Tyrion doing down there? Could he be releasing Viserion and Rhaegal? Will they burn him to a crisp? If Tyrion dies, we riot.

11. Why are the Night's Watch chopping a door down?

MAYBE BECAUSE THEY WENT TO FETCH JON'S BODY AND IT WASN'T THERE ANYMORE?

12. Who are the Bolton's roasting?

The Boltons are readying to fight a nondescript army, and to threaten them they show a body burning on one of their famous crosses. Do you think it's a character we know? *Whispers* could it be Stannis?

It looks like during her time absent from the show in seasons four and five, Yara has been kicking back and discovering her sexuality. Since we know Theon will be returning to the Iron Islands (where else is he going to be dunked in water like he is in the trailer? #WhatIsDeadMayNeverDie), it looks like Yara might have let herself go a little since failing to rescue him.

It's SO boring and Arya is so much more interesting than the storyline she's been given. Give her eyesight back and send her away from the House of Black and White ASAP please.

15. Is Maegary going off at the religious end?

Margaery still looks like a trainwreck, but the shot of her clasping hands with the High Sparrow suggests that she'll make her way out of her sticky situation by joining their cause. Though will she be sincere, or is it just a ploy?

The White Walker looks just as confused as we are. Though if we were to guess we'd say this was a vision with the three-eyed raven.

While looking at Jon's (temporarily) dead body, Davos says: "I've never been much of a fighter. Apologies for what you're about to see", then rips out Longclaw to presumably kill the bejeezus out of the Night's Watch traitors. We can only hope Ghost (who finally shows up) will help.

What did you think about the trailer? Tweet us @sofeminineUK!